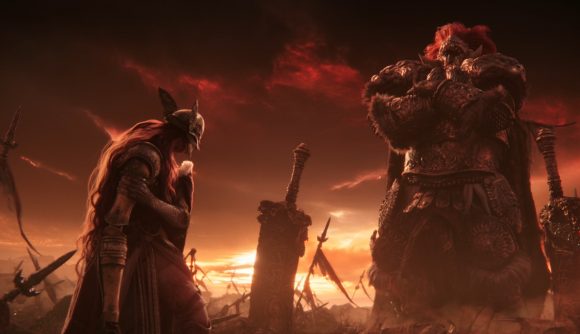 Elden Ring is probably 2022’s most hotly anticipated game, with fans itching to download and play the massive open-world RPG (and meet its delightfully charismatic Pot Boy). While the Elden Ring release date is still a couple of months away, it appears the game has been added to the PlayStation database ahead of time, revealing its PS5 file size and preload date.

Twitter account ‘PlayStation Size‘, which monitors new additions to the PlayStation Database, reports that the Elden Ring file size on PS5 will be 44.4GB. This, however, is excluding a day one patch that developer FromSoftware will inevitably push out, so this file size isn’t set in stone just yet. It’s worth noting that, while they’ll be somewhat similar, this doesn’t represent the file sizes on other platforms such as PC and Xbox Series X|S. PS4 and Xbox One file sizes will also likely be larger due to the better compression technology in the new-gen consoles.

As well as the file size info, the Elden Ring preload date for the PS5 was also found by PlayStation Size. They report that players will be able to preload the game on February 23, which is two days before it releases on February 25. This is the typical window for PlayStation preloads.

While these remaining weeks of waiting for Elden Ring will feel like agony for excited gamers, you’ll at least be able to have it downloaded in good time ahead of its launch, meaning you can dive straight in and take on some of the many Elden Ring bosses.

While fans of the Dark Souls series were hyped for Elden Ring regardless, a limited technical test that took place in November quickly established Elden Ring as the game to look out for in 2022. Our pals over at PCGamesN even went as far as to say that it might be the most impressive game demo ever.