Found in the Limgrave Tunnels, the Stonedigger Troll is a modified version of the gigantic foe you have most likely come across in Limgrave. However, this one is more ferocious with its attacks and wields a club to add some extra punch to its powerful slams and swipes.

So, whilst it can overwhelm you, here are some tips for how to beat the Stonedigger Troll in Elden Ring. Do so and you will net yourself a nice Talisman as a reward for making it through the full dungeon.

Elden Ring how to beat the Stonedigger Troll

When taking on the Stonedigger Troll it is key to always stay behind it if you can. This will ensure you can avoid any swipes or grabs. It also puts you in a much better place to hit its back legs.

While you are underneath him, watch out for any stomps, which can stun you and leave you vulnerable for a follow up attack. It can do a maximum of three in one attack. 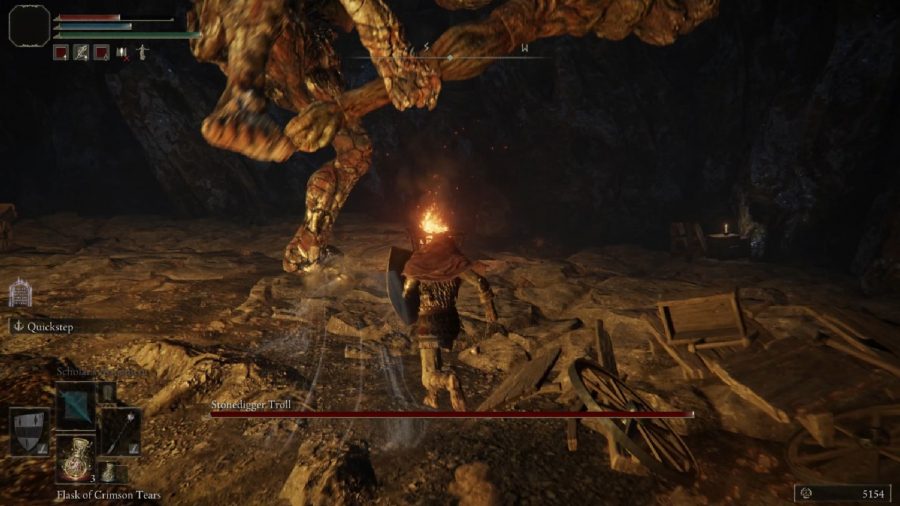 If the troll stomps with its right leg, it will drag his club along the ground. Dodge through that attack and then turn around and dodge behind the troll as he is about to perform a follow-up slam. Once behind him you can land a couple of hits.

If it grabs its club with both hands, it will stumble around before slamming it into the ground. Keep behind him, as if you get hit by this attack it will wipe out almost all of your health.

This attack can also be a sequence of hits rather than a large slam or a mixture of the both. The same principle applies, keep behind him.

Finally if you do get hit, don’t panic and start frantically rolling away, as you will most likely get caught in a follow-up attack. Instead, roll through the next attack, wait for the troll’s long recovery times to kick in and heal up. This tactic can also be utilised when it comes to attacking as it can often take it multiple seconds for the Troll to stand up.

And there you have it, our rundown of how to beat the Stonedigger Troll in Elden Ring. For more tips and boss guides, check out our Elden Ring walkthrough, which is packed with useful information.