As the Demigod of Stormveil Castle, Godrick has spent his life grafting, contorting himself into the multi-limb monstrosity that you fight to hold onto the crown of Stormveil Castle. As one of Queen Marika’s children, he has been driven to lunacy as one of the offspring that is most distant from her bloodline.

When it comes to fighting Godrick, he is predictable. However, he can land some incredibly powerful attacks, which makes him an intimidating brawl. Fortunately, he is rather easy to learn which means that you can beat Godrick the Grafted in Elden Ring with these tips highlighted below.

Elden Ring how to beat Godrick The Grafted

In order to beat Godrick, the Grafted in Elden Ring, you will need to learn his moves and the dodge timings for his attacks as these are vital to being able to beat the boss of Stormveil Castle. Our core tips for our Godrick the Grafted boss guide are:

The fight’s first phase involves a lot of exploiting recovery times. Chances are Godrick will open the fight with an uppercut, dragging his axe along the ground. This can be dodged by rolling through it just before he swings and to his left side, allowing you to land a few hits, as his attack will completely miss you.

If he jumps in the air then you can also easily dodge this attack or block it with a shield. 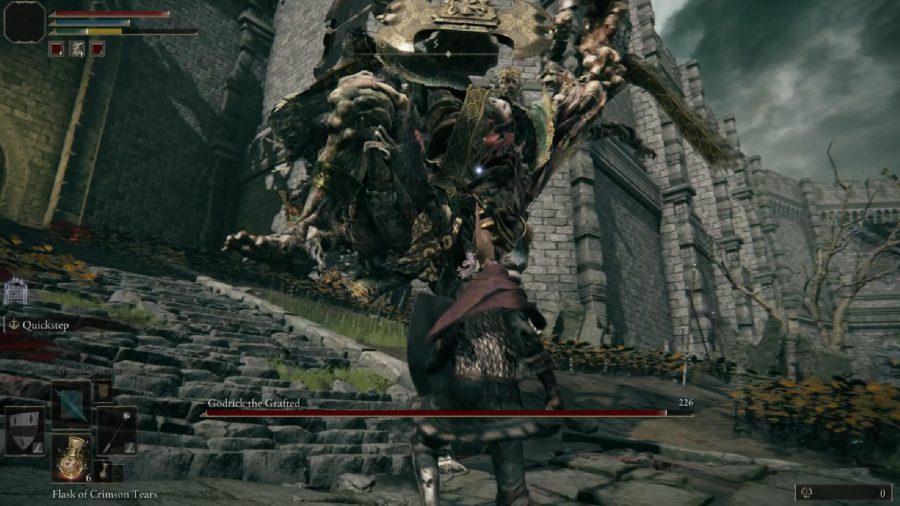 When he lifts his right leg and turns his spear upside down, dodge away from him a couple of times as he will do a ground shatter that can stun you if you get caught in it.

When Godrick spins his axe and a whirlwind surrounds him, he has activated an Ash of War, and will either drag his axe on the ground or begin rolling. If he drags his axe, he will fire two wind shots at you which can be dodged by rolling just after they have been fired from Godrick.

If he begins rolling he is about to jump in the air and slam the ground. This can be countered with a roll just as he begins to come back down to the ground. Instead of jumping he can also follow this up with a regular melee combo or the wind attack mentioned above. This can be hard to distinguish so it is best to hold your shield up as he finishes rolling and wait to see what he does before either rolling behind or away from him. He can also do this attack outside of being enhanced by the Ash of War. 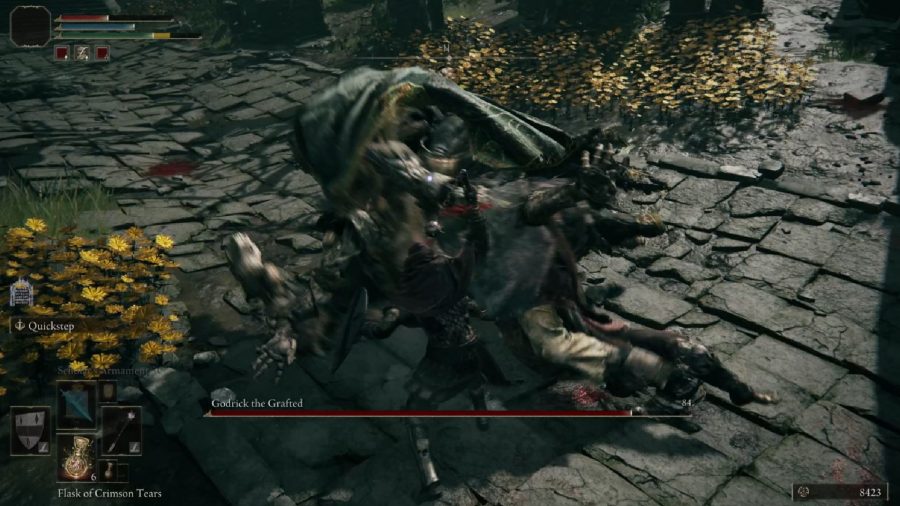 His regular attack combo is either a three or four-hit combo. You can dodge through his first two fast swipes by dodging backwards, and the third can easily be avoided by rolling to his left side. He will then do a grab to finish off that has a long delay. If you just walk or roll around his left side, you will reach his rear and be able to land a good three to five hits.

Godrick also has a large axe sweep with either one or two axes from his left side which can again, easily be rolled through. The same can be said for his jumping slash.

If Godrick holds two axes against his right side he is about to perform an extended multi-hit combo that is devastating. To avoid this, you will want to continuously roll backwards. The first two swipes are short and two rolls backwards can get you out of the way.

The second two hits are large swipes from the left and right that have a much further range. You will need to dodge twice rapidly backwards to avoid them. Finally, he will finish with two large slams to the ground that has an exceptionally long range. Instead of rolling away, this time roll towards him and to his side, which allows you to punish him while he recovers. Once he reaches half health, Godrick will pull off a dragon’s head in the arena and attach it to his arm. His second phase will always open with a fire breathing attack from the dragon head. So, to land a bunch of free hits, just run towards the Godrick and hit him from behind or the side.

If he breathes fire and you are caught at the front of him, continuously roll backwards to avoid the fire breath. If you are at a distance from Godrick he can also breathe fire across the entire arena, but this can be dodged through by dodging to the side as the fire breath passes.

He will perform his ground shatter attack again here when he turns his spear upside down. However this time he strikes three times and the radius is much larger, so you need to roll away further. As with the first phase, Godrick can also perform his whirlwind Ash of War attack, this time imbued with the dragon’s fire. If he rolls towards you he will slam once again, which must be avoided by dodging behind him as the impact will cause an explosion. So, you don’t want to get caught at his front. The wind shots can be dodged in the exact same way as the first phase.

If Godrick strikes the Dragon’s head into the ground he will spin and get the dragon to spew fireballs across the arena in front of him. Those fireballs encompass about half of the arena, so you want to back up as far as you can while he performs his attack.

The only other change is his regular combo, which can be dodged much in the same way as the first phase. However, when he attempts the fourth hit with the dragon head you cannot dodge into his left side as the head will grab you. Therefore, you need to dodge away from Godrick and then run in for a few hits after he has swiped from the side.

And that covers our tips for how to beat Godrick the Grafted in Elden Ring. In short, you need to play slow, make you attacks matter and don’t be afraid to wait and find the best moments to attack. For more boss guides, check out our Elden Ring walkthrough which is packed with tips and useful information.