Limgrave is packed with dungeons to explore, each with their own bosses to fight. And, in Elden Ring, one of the most hectic boss encounters is with the Demi-Human Chiefs, which are found in the Coastal Cave. Chances are you are going to get ambushed by dozens of grunts when fighting them, making it a tricky battle, so you will need an Elden Ring guide highlighting the best ways to beat the Demi-Human Chiefs.

These Demi-Human Chiefs are grouped together with a number of other demi-humans, which can mean you can quite easily get pinned, trapped by multiple enemies, and completely obliterated in seconds. However, there are some key items you can bring in with you to help out in the fight and some strategies you can adopt.

So if you are stuck and looking for some help, read on through this Elden Ring guide on how to beat the Demi-Human Chiefs in the Coastal Caves within Limgrave.

Elden Ring how to beat the Demi-Human Chiefs

The first key tip for this fight is to bring the Lone Wolf Ashes if you picked them up from Renna at the Church of Elleh. For more details on her location, check out our rundown of the Elden Ring NPC locations.

It’s worth finding this Spirit Ashes location as they will consistently stun both the Demi-Human Chiefs and the regular demi-humans in this arena. They should also last the whole fight if you are lucky.

Combining both the wolves and your weapon attacks, which have the ability to keep the bosses stun-locked, you should be able to keep the Demi-Human Chiefs stunned for about 80% of the fight, stopping them from landing some of their strong attacks. 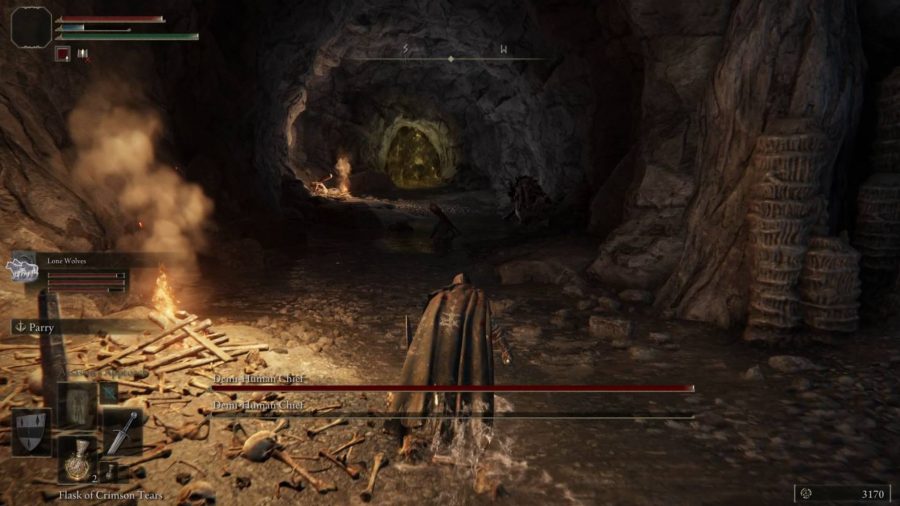 When you do summon the wolves do so from behind cover and then go in for a few hits to distract all the demi-humans by the entrance and the first Demi-Human Chief. This will stop them from calling the second Chief and more grunts who are sitting further back in the arena. They will stay idle if you do this properly, allowing you to attack them later.

This helps split both of the groups up and makes the fight far more manageable. Once the first one is down, do the same for the second, stunning them, and making use of the spirit wolves you have left with you and you should be able to slay them after a few tries.

It is well worth taking them on as you will gain access to the Church of Dragon Communion, which offers some of the best Incantations in Elden Ring.

So that covers our guide on how to beat the Demi-Human Chiefs in Elden Ring. For more tips and help, check out our Elden Ring walkthrough for item locations and more boss guides.