Dying Light 2 has had a long road to release, but seven years on from the original, Techland has managed to expand and elevate what the series is known for. The first game was a melee-action follow-up to Dead Island, but Dying Light 2 brings the people of the apocalypse out of the shadows and into the spotlight, creating a rich, dynamic, and vastly enjoyable role-playing game.

When I first played the game during a Dying Light 2 preview, I was taken aback by how much emphasis Techland placed on its characters, rather than throwing you into a horde of zombies from the get go. And, now, after spending dozens of hours in Villedor and seeing just how much my actions affect the game’s narrative, I can safely say that Dying Light 2 is all about the people of a pandemic, rather than the monsters themselves. This is a somewhat polarising change that’ll split die hard Dying Light fans down the middle.

I, however, love this refreshing take on the zombie apocalypse and through watching relationships blossom and fade, it’s clear Techland captures human nature and how distinct we truly are from one another. These dynamics are represented in each one of the three Dying Light 2 factions, where the people within work together – and sometimes against one another – for the greater good.

And, in Dying Light 2, your choices put you on that same playing field. While the Survivors, Peacekeepers, and Renegades all have information you want, there are many ways you can acquire that knowledge. You can work with a faction to gain their trust, you can work with an opposing faction to undermine another, or go it alone.

This narrative freedom not only allows you to play Aiden however you want, it also affects the game’s ending. While the core pillars of Dying Light 2 play out in the same way, who you chose to align with drastically affects the fate of Villedor and its inhabitants. 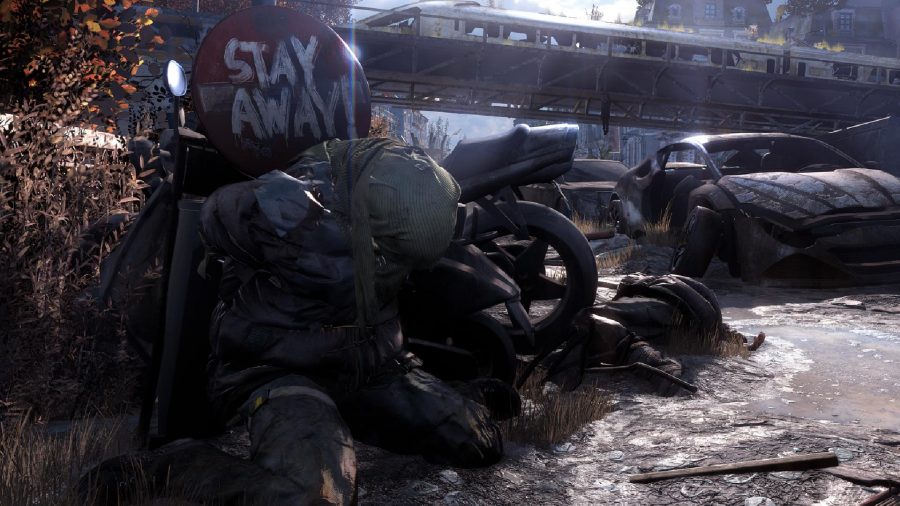 Unlike other RPG games, you can’t actually predict which decisions might have an effect on your story later down the line. Although some of the choices are quite harmless, doing things like betraying one of the factions in one area, and saving the person who witnessed the betrayal from sudden death, can suddenly feel like weighty choices. And while I personally didn’t align with said faction in the end, saving myself a heap of trouble in the process, this freedom to play the game in your way means you go into each and every narrative beat on edge, wondering if a decision may come back to haunt you or if you had played a perfect game of chess.

In that way, Dying Light 2 achieves that fabled goal of seemingly meaningless choices drastically affecting events down the road. The end result isn’t quite the promise made at the game’s E3 2018 reveal, but it is a good attempt.

And, although the end results don’t change too much beyond a few key points, the way in which your character interacts with others will. Dying Light 2 puts the spotlight on you and the people you choose to empower. While you choose how you interact with them, you’ll do well to remember that you should never underestimate how unpredictable people can be in times of need – and it’s something that adds an edge to the series. 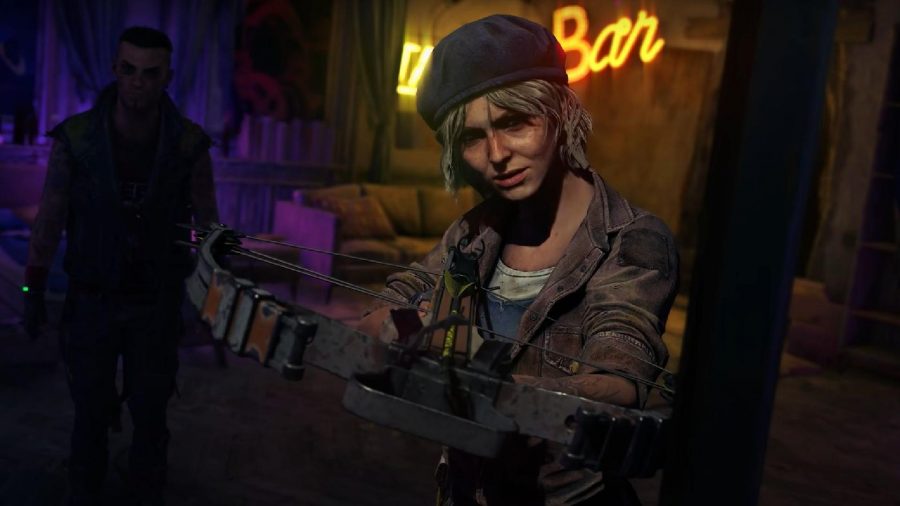 Due to the fact that the vast majority of your time in Dying Light 2 is spent talking to people, hearing about their struggles and deciphering their motivations, Dying Light 2 feels far closer to a Fallout game than the original Dying Light.

In all but name it follows that formula of creating engaging characters, some loveable and caring, some villainous and destructive, that you are drawn to like a moth to a flame. The work done on the writing side and the performances given by the entire cast, including Rosario Dawson as Lawan, really help sell you on this character-centric experience.

The only thing missing here – and this is something that Fallout does very well – is humour. Everyone in Villedor is serious, and while living in a big city that comes alive with the undead at night isn’t exactly fun, the supporting cast could have been more varied across the board which would have helped to add identity and personality to Villedor.

To make up for that tone, you’ll need to turn to the game’s combat system and parkour, which, at times, can be immensely gratifying. The hand-crafted weapons of the apocalypse are just as inspired as they were in the original game, but this time they feel vastly improved, with serrated blades slicing through limbs and baseball bats bashing Infected heads to a pulp.

You can modify them more in Dying Light 2, allowing you to put your own creative spin on a weapon of your choice. Want to give the infected a shock? Add some electrical wiring to it. Want to burn a path through the undead? Strap a mini-flamethrower to it. 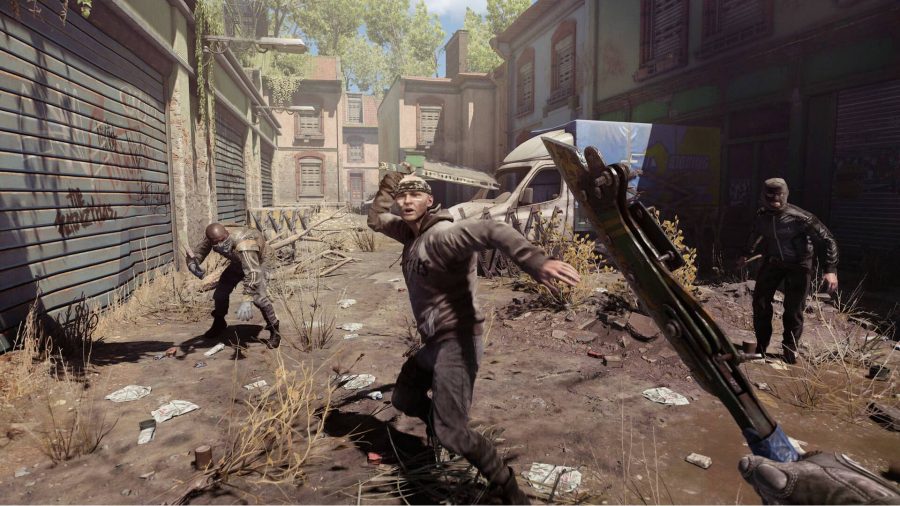 While creating these weapons is just as fun as they are to use, it’s worth noting that you can get through the game without them. The same can be said with gear bonuses and sets. While there are different categories, all of which have different pros and cons, you don’t have to pay too much attention to them, which is a bit of a sore spot given the game’s drive to become more of an RPG this time around. Combining pieces of the same kit, for example, might give you a buff in one area, but they don’t feel significant enough to sit down and spend time looking at the stats for each one.

Add in the excellent parkour system, which has been expanded with more moves and abilities, and you have a top-tier story, with excellent characters, and a fulfilling combat system to boot. The combat and exploration is more dynamic than the first game and allows you to kick people into deadly spikes, run along a rooftop, and jump down to the ground and roll, all in one go.

Unlocking new moves in the skill tree is also simple and enjoyable as most of the best skills in Dying Light 2 can be grabbed by focusing your efforts on one part of the parkour or combat trees. I still had a lot to unlock at the end of the game, but I didn’t experience even half of what was on offer in the open-world. That might be overwhelming for some people, but given you don’t need to unlock all the skills to complete the game – especially if you’re not planning on using certain weapons – this should ease the concerns of any newcomers. 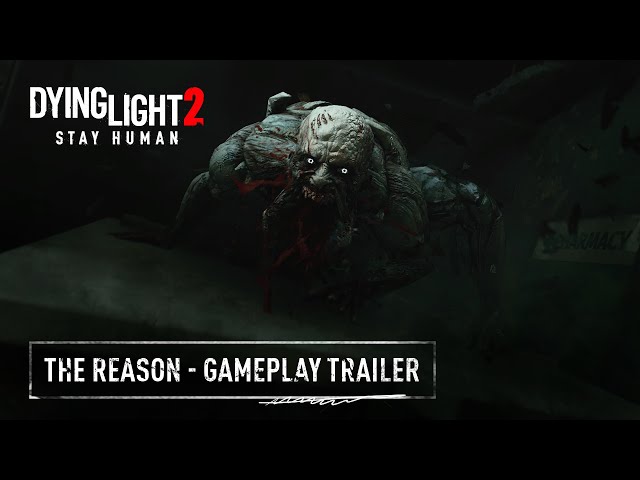 The open-world, while big, also doesn’t feel bloated. There are a lot of quests to do and some repetitive activities, but the two main areas aren’t packed with bandit camps, fetch quests, and time-sinks that you’d find in games like Far Cry 6, for example.

However, the one significant change to the world and gameplay is the experience at night. Venturing outside in the dark in Dying Light was absolutely terrifying and would often result in you being surrounded by the undead. In Dying Light 2 however, night exploration simply feels like an extension of day exploration.

I barely ever saw a Volatile (outside of scripted story sequences) and the UV Flashlight, which was key in the first game, is rendered useless in the second, as you can outrun most infected with ease. With that in mind, the intensity of Dying Light 2’s night time sequences is lessened and the game does feel like it is missing that part of the original’s identity.

In a way, it feels like Techland has chosen to focus more on the characters and the people living in Villedor, rather than the survival and horror elements that the first game became known for.

It’s clear then that Dying Light 2 might be a vastly different game to the original, but it is also far more ambitious. While the core combat remains largely the same, Techland has spent the last few years refining the series’ weakest spots: the story and its characters. And, with the development stalled by a global pandemic coincidentally close to the game’s premise, Techland has dug deeper to provide a richer world that should resonate with people’s nature more than your standard zombie game.

We all lost connections during lockdowns, or suffered fractured friendships, and witnessed how people could rise – or fall – in a time of need. Techland has managed to capture that collective trauma and experience in the narrative of Dying Light 2. And, for that reason alone, Dying Light 2’s narrative ends up hitting harder than it would have if we hadn’t all experienced the last two years of the COVID-19 pandemic.

Dying Light 2’s makeup is considerably different from the first game, delivering an impressive and meaty character RPG you can sink into, even if it does come at the cost of the game’s night-time horrors.