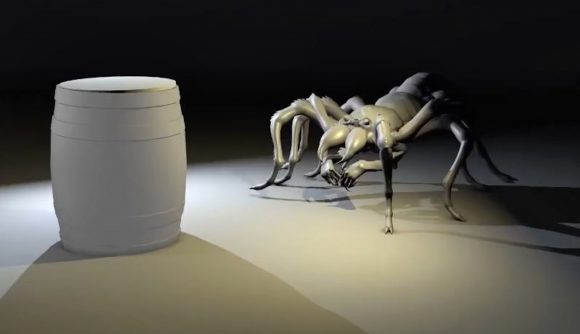 Would you rather have to fight ten great big spiders with a combined leg count of 80 or one great big spider with eight legs and two hands? That’s the question Dragon Age Dreadwolf fans are asking themselves this morning after some of the game’s early concept art resurfaced on social media. And the answer to that question? Neither, thank you very much.

We’re well into videogame season announcement now and with Geoff Keighley kicking off the start of Summer Game Fest last night, Dragon age fans are desperately scouring the internet for any sign of life. While it’s unlikely Dreadwolf is going to make an appearance at any of the upcoming presentations, that’s not stopped fans pouring over old content.

A Twitter account that shares daily Dragon Age content shared four pieces of artwork last seen in the behind the scenes trailer from August 2020 yesterday, and while all these creatures scream Dragon Age, the screengrab of the spider with eight legs and two hands has people reaching for the nearest flamethrower.

In the trailer, BioWare says it has been “imagining new ways to use next-generation technology to bring the world and characters of Dragon Life” and it’s certainly done just that. The spider is shown walking towards a barrel in the trailer, while holding its hands in place like a little T-Rex – and there’s something about it which just makes you feel sick to your stomach.

All giant spiders will burn. pic.twitter.com/1JXld6hqCw

As you can see from the above thread, fans aren’t exactly pleased about it either – even two years later.

Bioware has already tormented us with different variations over the years, from giant spiders to poison spiders and fade spiders, but clearly the team hasn’t had its fill yet. Now we have giant spiders with hands, which honestly has to be one of the worst things to look forward to in an upcoming Xbox Series game.

Thanks Bioware, we hate it.