Destiny 2 Season 17 is underway, and with it comes a brand new Seasonal Activity to earn rewards, weapons and juicy XP for that all-important power grind. In Season of the Haunted, the activity is Nightmare Containment, a new public event that takes place in the Derelict Leviathan Patrol Area. It has a less obvious structure than usual Seasonal Activities, but we’ve got you covered with our Destiny 2 Nightmare Containment breakdown.

It’s an event similar to Altars of Sorrow on the Moon, which makes sense as the Derelict Leviathan is anchored above the Lunar Patrol Area. Calus’ corrupted flagship has returned to the Solar System overrun by the Egregore, the creeping vines previously seen in the Presage mission aboard the Glykon in Season of the Chosen.

The thrust of the activity is to draw the Nightmares plaguing the Leviathan to you, and then reap their essence, binding them to Eris Morn’s Nightmare Harvester. In our Destiny 2 Nightmare Containment guide, we’ll tell you exactly how to do that.

How to start Destiny 2 Nightmare Containment

While you’d think starting a public event like Destiny 2’s Nightmare Containment would be straightforward, it is catching out both new and returning players.

Unlike most recent Seasonal Activities you don’t matchmake directly into this event. Instead, you’ll need to navigate to the Destinations screen and open the Moon. You’ll see a big icon there for the Castellum with two options.

The top option, Castellum, loads you into the Leviathan to explore its various areas for secrets. The second option, Containment, is where you’ll find players already engaged in Nightmare Containment. Confusingly, you can explore or take part in the event by choosing either option, and both will set your Power Level to where it needs to be.

Once you load into the Derelict Leviathan look for a red icon similar to the markers in the Altar of Sorrow event. This is a Harvest point, where you can plant the Nightmare Harvester and trigger the event.

How to complete Destiny 2 Nightmare Containment Tier 1 and 2

Destiny 2’s Nightmare Containment is a tiered challenge similar to the vaulted Escalation Protocol event on Mars or the aforementioned Altars. Placing the Harvester will draw enemies to you in their scores, and all you need to do is mow them down. Your goal here is to accrue Shards of Dread by killing enemies.

Standard enemies drop one Shard, but the tougher yellow-bar Dread Bearers reward more. As in Nightmare Hunts, these enemies drop Unstable Essence, which boosts your damage against Nightmares. Each Dread Bearer will also drop a Core of Dread when they die, which you’ll need to dunk at the Harvester. Each dunk will reward extra Shards, and will also spawn a Reaper Scythe.

This is a powerful weapon with a relatively short timer that allows you to go ham on massive groups of Scorn, dealing heavy fire damage and earning you Vestiges of Dread, the primary reward currency. 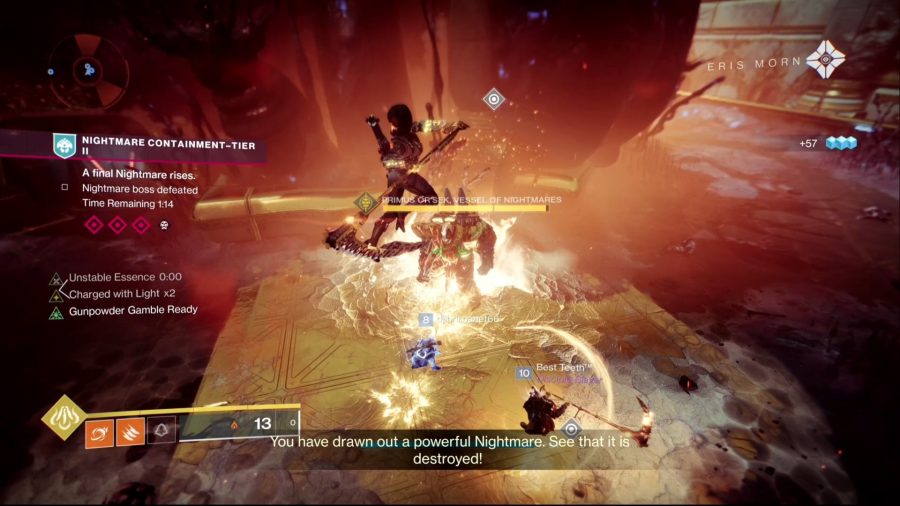 Once you’ve banked enough Dread, two Egregore Atavist enemies will spawn around the area. Their shields are immune to damage, but not to Guardians, so you can jump through and clock them in the chops to get rid of them. They spawn platoons of Cabal for protection, but nothing that poses much of a threat. When they’re done, a miniboss called Vessel of Nightmares will enter the fray. Burn it to a crisp to complete Tier 1.

You’ll then need to find the location of the Tier 2 Harvester, but once you do the process is more or less the same. The major difference is that the boss in Tier 2 is a Harbinger of Nightmares, and will spawn an immune shield twice during the fight. To break it, seek out the Resonant Splinters you’ve been shooting in the Throne World for the last few months and destroy them.

Once Tiers 1 and 2 are over, Tier 3 will begin in a more central area of the map. This week it’s the Nightmare of Elykris (one of the bosses from the Forsaken campaign). The Triumph page lists three bosses, so it’s likely they’ll rotate weekly. 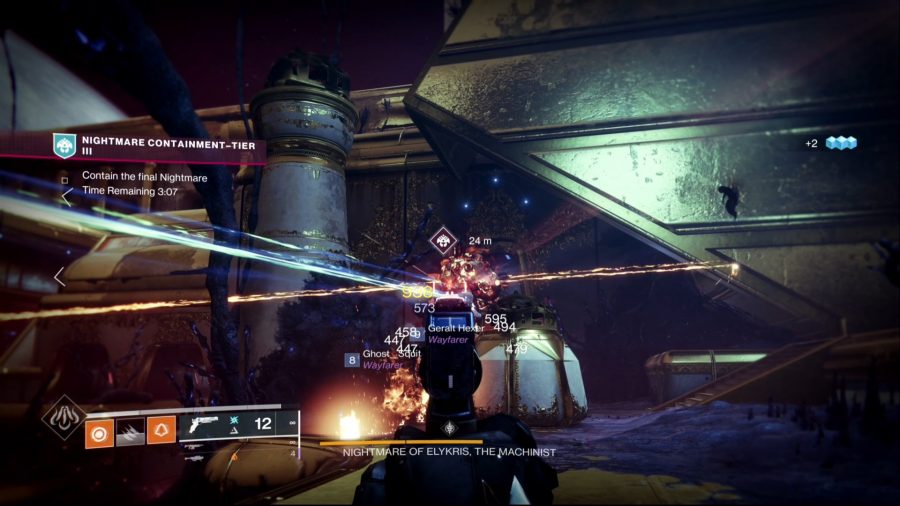 The fight is pretty straightforward: simply lay into Elykris while mopping up adds. The boss will spawn a shield at two-thirds and one-third health, and once again you’ll need to destroy Splinters. The hardest part of this fight is the amount of Screebs that spawn, so watch your back for sudden explosions of blue gunk.

Killing Dread Bearers during this round will drop Cores of Dread, which once again allow you to get hold of a Reaper Scythe to increase your damage output on the boss.

When Elykris falls you’ll receive a random world drop, but the best rewards come from spending your Vestiges of Dread at the Harvester behind the loot chest. It costs 500 each time, but is worth doing as it rewards higher-level seasonal loot.

You’ll also get about a minute and a half to explore certain areas of the ship that are otherwise sealed. When the Lockdown Protocol lifts between Containment events, you can find hidden switches that hide additional loot chests. Look for green lights and listen for a tell-tale beeping to find them.

So there you go, that’s all you need to know to complete the new event. With all the info in this Destiny 2 Nightmare Containment guide – and three of the best Destiny 2 weapons in hand – you’ll be taking out Nightmares and reaping rewards in no time.