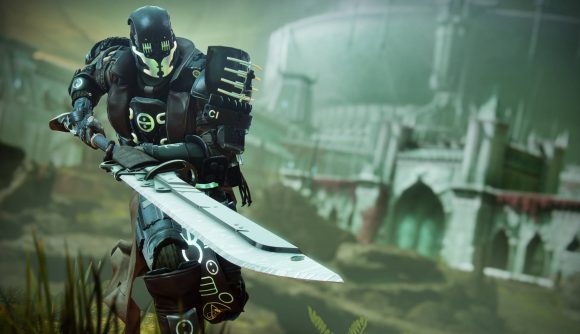 If you’re a Destiny 2 fan, today’s showcase from Bungie may have just been your highlight of the year so far. The game’s next expansion, The Witch Queen, is crammed full of things to get excited about. For those who are weapon-obsessed, there’s a new archetype coming to Destiny 2 when The Witch Queen releases, and it’s a bit of a wild one.

Combining the melee capabilities of a sword and the close-to-mid-range firepower of a slug shotgun, the Glaive aims to give you plenty of adaptability and coverage in your energy weapon slot. It is also Destiny’s first ever first-person melee weapon. It’s like Call of Duty’s famous ballistic knife, but on some intergalactic, Hive-mashing steroids. Not only is it lethal, it can also protect you too by blocking incoming attacks.

What’s even more interesting is that your first Glaive will not simply be found in chests or earned as a reward – it is the poster child for an all new weapon crafting system that is coming to Destiny 2 with The Witch Queen expansion.

Weapon crafting allows you to build and upgrade weapons through a combat-based system, and it’s how you get the Glaive in Destiny 2. Using a weapon regularly in combat and completing objectives with it will give you more crafting options and allow you to upgrade its power.

According to Bungie, weapon crafting offers the freedom and “deterministic paths” of mechanics like Focused Umbral Engrams, and then some. It seems as if weapon crafting will give Destiny 2 players more control over the development and stats of their favourite weapons than ever before.

While we’re mightily excited to impale and blast away Hive to our little heart’s content with the new Glaive in The Witch Queen, weapon crafting has certainly grabbed our attention too.