Running through Tuesday August 9, the Destiny 2 Solstice 2022 event brings with it a handful of new gear, weapons, and currencies to chase – as well as a revamped seasonal event known as the Bonfire Bash.

Every year, Destiny 2 cycles through four Seasonal Events: Guardian Games, Solstice, Festival of the Lost, and The Dawning. They always come loaded with new challenges and gear to earn, but from Season 16 onwards they’re going to be different. Season of the Haunted is the first to feature the new Event Card system, which allows you to tackle challenges to earn badges and, crucially, a new title.

Controversially, you can pay 1,000 silver to unlock a special section of the Event Card that rewards you with a few cosmetics – in this case a Ghost Shell, Sparrow, Emote, and Ghost Projection. But right now we’re focusing on how it all works and what you can earn, so you can make the most of the Destiny 2 Solstice 2022 event.

The first thing you’ll notice is that the Tower has been given a pretty big overhaul: Shaxx has rolled in the astroturf and Amanda has gone nuts with the bunting. The whole thing is lovely and warm and summery – a far cry from Destiny 2’s atmosphere so far in 2022. Anyway, Eva will set you up with a snazzy new set of Candescent Armor, all the freshly-baked Bounties you can eat, and a new questline.

The new Solstice has a grind that ties somewhat into The Witch Queen’s crafting system, which allows you to upgrade each piece of Candescent Armor, re-rolling the stats and eventually adding the usual Solstice glow as a mark of your dedication. You’ll also be able to earn random rolls of two new weapons: the Something New Hand Cannon, and the Compass Rose Shotgun. Ultimately, you’ll be completing challenges to fill out your Event Card and earn currency to take into the new Solstice Event, the Bonfire Bash.

How does the Bonfire Bash work?

As with most other elements of this year’s Solstice, the primary event has also been given a makeover. You’ll return to the EAZ (European Aerial Zone), where the Summer fairies have been hard at work spreading flowers and sunshine. It’s all in preparation for Amanda Holiday’s new celebration, the Bonfire Bash. As usual though, the enemies of Humanity have crashed the party, and you’ll need to turf them out.

At the top of the map you’ll find a massive bonfire, which you need to ignite. You do this by taking out Ignition Carriers and stealing their Igniters, which you then hurl at the Bonfire. You have a set amount of time to dunk as many as you can before a boss appears. You’re aiming for 20, as the higher you build the fire, the better the rewards when you’re done.

Periodically the Taken will spawn in to ruin your day, and you’ll need to rush to take out blights as quickly as possible. Given that this is a 3-player matchmaking event, Ignition Carriers and Taken Blights spawn in threes. Work together, and the event is quick and easy. Once you’ve built the Bonfire as high as you can, you’ll burn your accrued Silver Leaves to make Silver Ash, which you then use with Kindling to upgrade your Candescent Armor. Confused? Don’t be: we’re getting there. 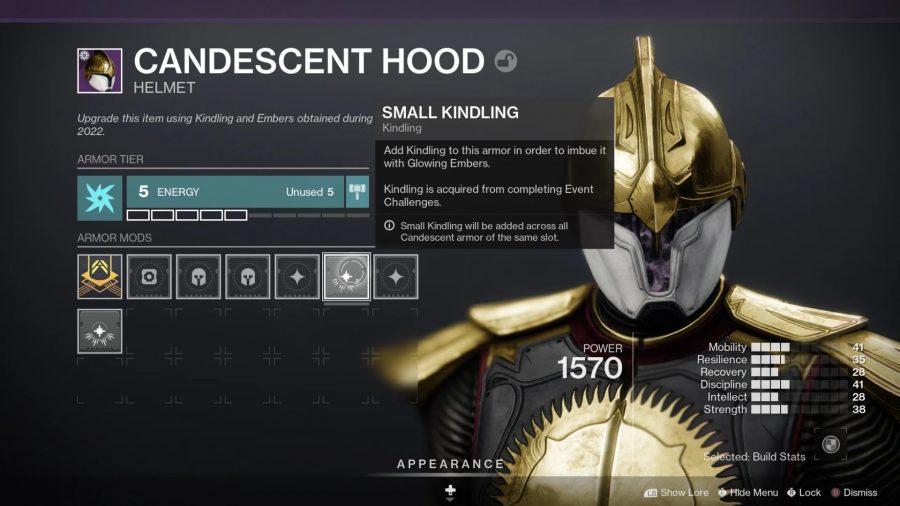 How to get Silver Leaves in Destiny 2?

Silver Leaves are a new form of currency rewarded for completing playlist events and ritual activities while wearing at least one piece of Candescent Armor. You can carry up to 99 at a time, so once you have a decent amount, take them into the Bonfire Bash where you’ll convert them into the aforementioned Silver Ash.

On its own, this currency is useless, but hold onto it anyway. You need to find Kindling to make it work, which you earn for completing challenges on your Event Card. 1 piece is Small Kindling, 2 pieces make Large Kindling, and you’ll need 3 pieces to bump your armor up to the third and highest tier. Each time you Kindle your armor, you’ll be able to spend Silver Ash to re-roll the stats on it.

The first two times this happens you’ll get randomised boosted stats, with a small chance the stat spread will come out worse than it was. However, when your armor is fully Rekindled you get to select which specific stat you want to boost – though, you won’t be able to select a boosted stat you already have assigned on your Ghost for Engram focusing.

If you buy new pieces from Eva in order to snag a high roll, they will retain the tier you’ve reached with Kindling, as this is a finite resource. However, to increase and reroll the stats again you’ll still need to spend more Silver Ash. Each piece of armor will require you to follow a simple questline to fully Rekindle it, although you can do it in any order you like.

How to fill out your Destiny 2 Solstice Event Card

There are 24 challenges on the Solstice Event Card, which require you to grind a fair bit if you want the cool new Flamekeeper title. While most are simple, such as completing 25 matches of either the Crucible or Gambit, others will require the use of certain weapons such as Hand Cannons and Shotguns, or the completion of events like Dares of Eternity, the Blind Well, or Season of the Haunted’s Sever missions.

You’ll find the Event Card on your Quest tab beside the Seasonal Challenge list, and you’ll be pleased to know that you can track specific challenges to keep tabs on your progress.

So there you go, that’s all you need to know to make the most of the Destiny 2 Solstice 2022 event. Strap on your best shotgun and hand cannon, and go make that armor glow, Guardian.