Demon’s Souls is a notoriously tricky game, though in the PS5 remake, there’s an exploit that should allow you to kill any enemy – including its tough-as-nails bosses – in a single hit. The newly discovered glitch is tied to the infinite souls exploit that we covered earlier this week, and while it takes some effort to prep, becoming nigh on unstoppable is a more than sufficient reward.

We’ve already gone in-depth on Demon’s Souls’ best weapon and how to craft it, the best soul farming spots and Pure Bladestone farming spots you’ll find in the whole wide world of Boletaria, and how exactly to avoid the late-game item grind using a new duplication glitch, but this latest discovery might be the biggest, most game-breaking find to date.

In fact, this here exploit should probably only be used on a repeat run to avoid ruining the game for yourself.

First, you’re going to have to obtain a Gold Coin. Your best bet is to farm one or more of them from the Fat Official enemy type found in world 2-1.

Now that you’ve acquired this luck-boosting goodie, you need to head on over to the Nexus, jump into your inventory, consume your Gold Coin, then have a quick chat with the Maiden in Black. This should cause your luck stat to start rising to a ridiculously high level. 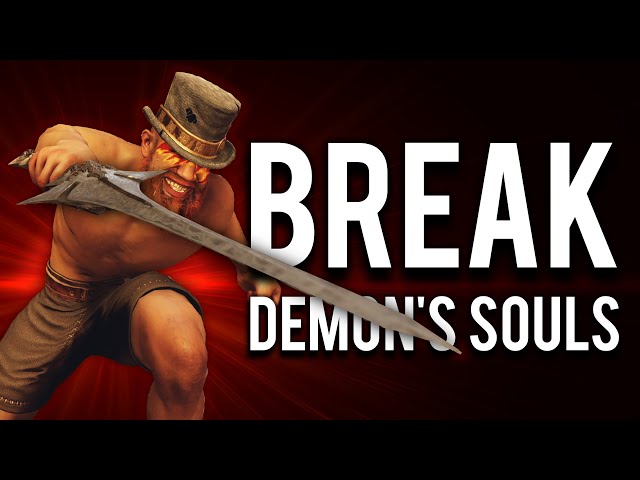 With your luck stat now glitched to high heavens, it’s time to head out and grab yourself the Blueblood Sword – a weapon that scales infinitely with luck. See where we’re going with this?

Now comes the tricky part, as the Blueblood Sword isn’t easily accessible until your already a fair way through the game. You need to travel to world 5-1 and head to the western part of the giant poison swamp. There you’ll find a Broken Sword guarded by some hard-hitting enemies. Check out Ymfah’s video embedded above if you’re struggling.

Now you need to make your way through the Valley of Defilement, defeat Maiden Astraea in 5-3, and take her Pureblood Demon Soul to Blacksmith Ed in world 2-1. Enter the upgrade menu and get old Ed to turn your rubbish Broken Sword into a glorious Blueblood Sword.

With a luck stat as high as yours, the Blueblood Sword’s damage output should be nothing short of legendary. Now head out and show those demons who’s boss!