Finding the best soul farming spots in Demon’s Souls PS5 isn’t a straightforward challenge. You have to consider both the farming run’s level of difficulty and its potential rewards in order to determine where your time might be best spent.

An easy run that you can achieve quickly and consistently will usually always be better than a hellish gauntlet that you end up flubbing several times before netting some decent rewards. Demon’s Souls is a huge game with a great many potential areas to farm in, and that’s why we’ve put together this guide to point you in the right direction and give you couple key spots where you can earn a decent number of souls in no time.

We’ve got excellent soul farming spots for both the early and late game that should be easy to run through with minimal fuss, though you’ll of course need to reach the areas in question before you can start raking in the big bucks.

One of the scariest foes you’ll face early on in Demon’s Souls is the Red Eyed Knight. He can be found guarding the mausoleum in world 1-1. When you bump into him for the first time, he’ll very likely finish you off in a few swift strikes, but he’s actually a real pushover if you know how to handle him.

The important thing here is to grab a shield and keep it held up at (almost) all times. The majority of his attacks outside of his shield strike will bounce straight off your shield, so you should be relatively safe to start honing your backstabbing skills.

Lock onto him and circle around to his back when he pauses after an attack. Now quickly lower your shield, tap R1, and you’ll perform a high-damage backstab. You might have to pull this off a few times before he finally kicks the bucket.

Not only will this farming spot net you around 2,000 souls per run, but it’s also the best way to master the art of the backstab – a skill that will come in incredibly handy as you progress through Boletaria.

If you’d rather not face him directly, you can lure him to his death by grabbing his attention and getting him to follow you to the stairs leading up to the ramparts. Descend the stairs ever so slightly and bait him to fall from the top flight.

This likely won’t kill him straight away – and you really should use the backstab method if you want to ‘git gud’ – but the option is there if you need it. Plus, it seems like the amount of damage he takes from the fall has been reduced when compared to the original Demon’s Souls. 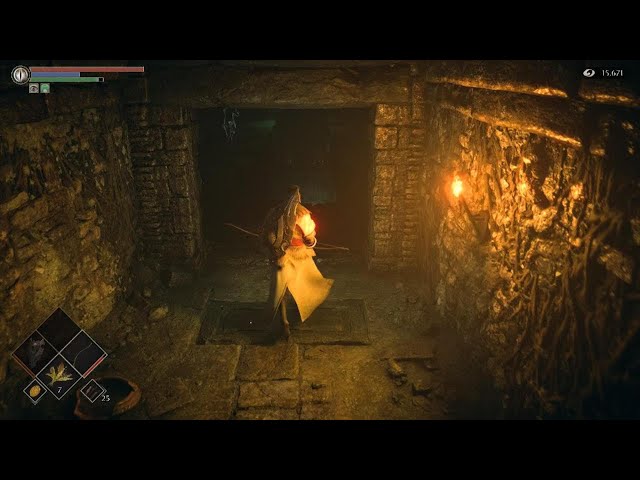 One of the quickest, safest late-game soul farming spots can be found in world four, the Shrine of Storms, directly after the Ritual Path Archstone. You’ll need to first defeat the Adjudicator boss to reach this area, and we’d strongly recommend bringing along a bow and plenty of arrows.

Head down the stairs, run through the dingy-looking tunnel, and you’ll enter a large room full of extremely challenging enemies. Worry not, though! There’s an easy way to kill the lot of them.

Equip your bow and arrow, target the Reaper wielding a giant scythe, and start firing. He’s an easy one to spot as she should be standing in the middle of the mob.

Taking him down will cause the remaining enemies in the area to die, which is what makes this farming spot so very lucrative. You should earn around 5,000 souls per run using this method – and the best part is that you’re in no danger of being harmed at any point, provided you stay above the enemies.

If you’d rather skip the hassle of farming for hours, we’ve got a guide on how to perform the infinite souls glitch. There’s also a handy item duplication glitch, a guide on how to unlock Demon’s Souls’ best weapon, and a slightly game-breaking exploit that lets you kill every Demon’s Souls boss in one hit. Oh, and if you’re struggling to track down the game’s rarest upgrade material, here’s a great Pure Bladestone farming spot.