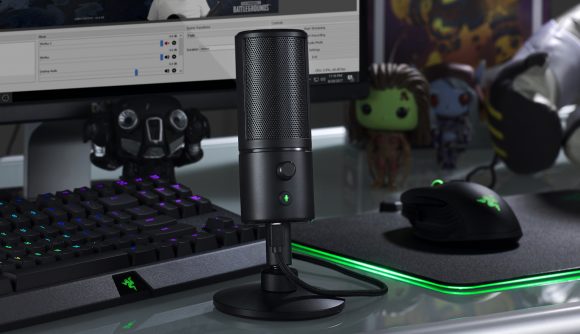 There’s nothing more satisfying than playing a game with someone who’s got a proper USB microphone. Their audio is crystal clear, leaving no room for misunderstanding. Well, now you too can join the club with this fantastic USB mic deal.

The Seiren has a supercardioid pickup pattern, which captures sounds made only in front of the microphone. In other words, this is perfect for streaming and voice over work. In fact, it’s used by some of the biggest streamers. It is a condenser microphone though, so be aware it will pick up the clickity clack of your mechanical keyboard if it’s too close or the gain’s set too high.

Unlike some of the other USB mics on the market, the Seiren is pretty compact, making it easy to pack away if you need to move or transport it. It also has controls for mute and volume allowing you to change settings on the fly.

If you’re a perfectionist, you’ll also like the fact that the Seiren features a zero-latency headphone output through a 3.5mm jack so you can listen to what you’re recording while you’re doing it. This allows you to make sure your audio levels are just right.

And get this – it’s not just for PC users. The Razer Seiren is licensed for the PS4, meaning you’ll be able to give your teammates crystal clear direction during your next Call of Duty: Warzone game.