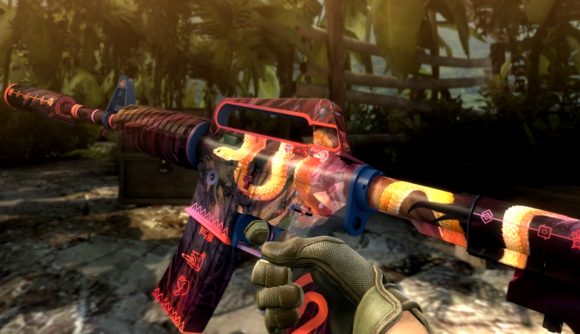 Ever since the launch of Operation Riptide, Counter-Strike: Global Offensive fans have been calling on Valve to nerf the M4A1-S, arguably one of the best guns in the game. Last week, the development team did just that, reducing the gun’s mag size from 25 rounds to 20. However, some fans think the nerf hasn’t gone far enough.

And that’s because, despite reducing the gun’s mag capacity, it’s not really changed the meta all too much. The assault rifle is still devastating in the right hands. Sure, you’ve got less bullets to play around with, but for top level players in the CS:GO ranks and on the world stage, this nerf has done very little to shake things up.

To counter that fact, many are now calling for the gun to be reduced in price. “Change the price of the M4A1-S and the M4A4,” Jacob ‘pimp’ Winneche tweets. “The better weapon is still the cheapest option, hence why the vast majority won’t switch. I love [that] CS:GO is addressing it, and I’m sure since they’ve taken an interest will gather feedback and adjust accordingly.”

Valve has changed the prices of weapons in the past to force the meta to change and it’s worked. The Negev, for example, used to be the most expensive weapon in the game at $5,700. But after a balancing patch, which buffed the gun at the expense of player movement and armour penetration, the price was dropped to $2,000, and then to $1,700 a few months later. The gun went from being not picked up at all to being used in support roles and force buy situations.

I love CSGO is addressing it, and I’m sure since they’ve taken an interest will gather feedback and tweak accordingly.

I trust in CSGO 🤜🤛 pic.twitter.com/UMgPGYQx7h

By making the M4A1-S more expensive, it should make the M4A4 more viable for Counter-Terrorists players to use. However, while it’s clear the community is in favour of more nerfs, the idea of increasing the gun’s base price and keeping its capacity nerf is certainly causing a debate.

Either way, it’s clear that while the nerf is a welcome change by Valve – and shows that the team is listening – there’s more to be done with balancing the meta.