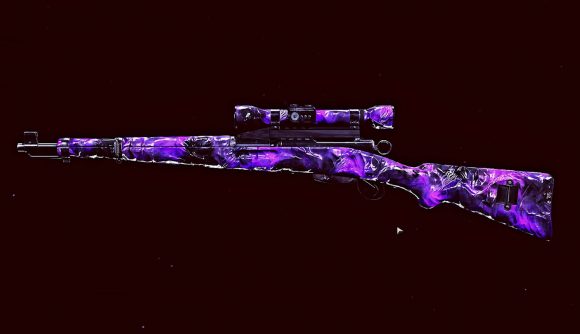 If you haven’t spent the last couple of months grinding Call of Duty: Black Ops Cold War Zombies, then you’ll be kicking yourself. Today, with the new Warzone Season 5 Reloaded patch, players will be to show off their Dark Aether skins on some of the best Warzone guns.

This dynamic purple camouflage can only be earned by completing every set of camo challenges for weapons in Zombies and is the ultimate reward for zombies players. Until now though, this camo had been locked to the mode – something that had frustrated the player base who split their time between Zombies and Warzone.

Raven Software teased the addition in the patch notes with an undeciphered message. But the image associated with it is named ‘bildeinhundertfunfzehn’,which roughly translates to image 115 – a reference to Element 115 that was used to create the zombies.

Now though, players can equip the funky skin on a Cold War gun of their choice and show off their zombie success. It certainly saves people creating their own Rainbow Dark Matter skins via an OBS glitch, that’s for sure.

It’s also worth noting that it’s not just limited to Dark Aether skins. Now every camo you’ve ever unlocked in Zombies will be available in Warzone, including the psychedelic ones like Bravado, Funkadelic, and Maniac.