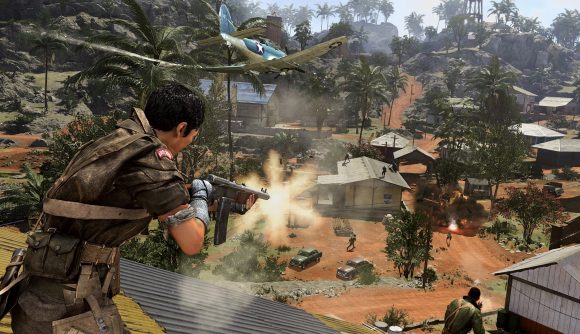 Around 24 hours into the Warzone Pacific era, developer Raven Software has pushed out a significant weapon balancing update as a new Warzone meta starts to form on the Caldera map.

Interestingly, Raven has made “numerous changes” to the recently-added weapons and attachments from Call of Duty Vanguard, however, in the official patch notes, it does not list which guns were tweaked or how they’ve changed. The developer does say though that changes will be reflected in the guns’ stats in the Gunsmith menu in-game, meaning it may take the community a while to figure out what has been buffed, nerfed, or balanced. We already thought guns like the Automaton and the NZ-41 were worthy enough to make our best Warzone guns list, but this update could blow the door wide open.

Raven also says within the patch notes that another weapon tuning update for Vanguard weapons is on the way “imminently”. This will address the bullet bloom players have experienced while using Vanguard weapons and will also balance some strong guns, with the PPSh 41 getting a namecheck, specifically.

Elsewhere in the patch notes, we do have specific changes listed for several weapons that dominated the meta in the final season of the Verdansk era. The likes of the EM2, OTs 9, Cold War AK-47, Swiss K31, and Modern Warfare Kar98k have all been hit with various nerfs.

In an attempt to address a potential “power creep” for Cold War weapons, two stocks that boost players’ movement speed have also been nerfed: the Raider Stock, and the SAS Combat Stock.

There are also a couple of unexpected buffs for Warzone’s two crossbow weapons which, if you ask us, is a bit of a hint we may be getting a crossbow-style weapon in Vanguard and Warzone Pacific Season 2. Modern Warfare’s Crossbow and Cold War’s R1 Shadowhunter have both had their damage boosted, and can now one-shot kill fully-plated players with a headshot.

For all the exact numbers check out the official Warzone patch notes here, and brace yourself for yet more weapon balancing in the coming days.