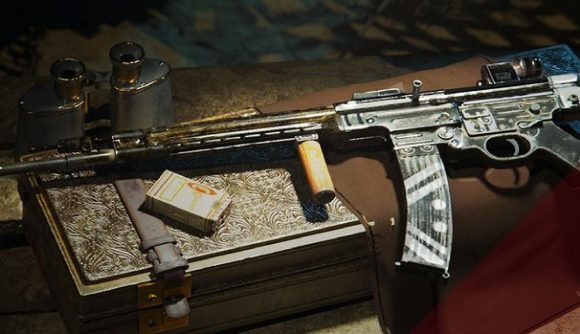 Call of Duty: Warzone has just dropped two new weapons into the Season 6 Battle Pass – and they are both from the upcoming Call of Duty: Vanguard. Players can now officially use the STG 44 and the M1 Garand in-game after players could preemptively add them to their loadouts last week.

However, if you are planning to use one of the new Vanguard guns in your best Warzone loadout, there is one small caveat – you can’t use the Gunsmith feature to customise your attachments.

Instead, each weapon has two blueprints, which can be earned by progressing through the Season 6 Battle Pass. If you have already passed a tier that rewards one of these blueprints, then good news – you will have it automatically unlocked for you when you log back in. What’s more, these aren’t any old Warzone blueprints. These Vanguard blueprints boast more attachments than the standard five you’re permitted, with some having as many as ten attachments.

Alongside both of these weapons, three calling cards, two emblems, three sprays, three weapon charms, two stickers, and six double XP tokens are available for free in new Vanguard tiers, alongside the final reward of the ‘Clocked In’ wrist accessory.

The ability to modify the guns and use the Gunsmith feature will be available for both of the weapons when Warzone is integrated with Call of Duty: Vanguard later this year.

For now though, take these blueprints into Verdansk to get a feel for what Warzone will be like once even more WW2-era weapons join the game’s arsenal.