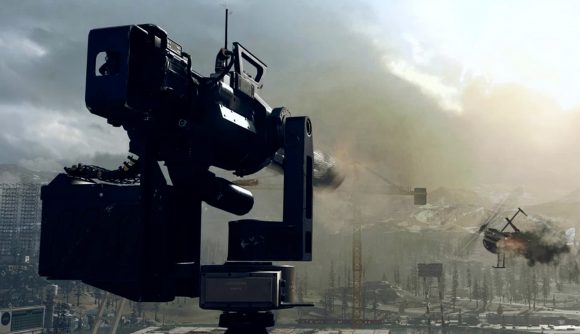 Since its introduction at the beginning of Call of Duty: Warzone Season 4, players have been eager to get their mitts on the Sentry Gun. This powerful killstreak reward automatically locks onto enemy players as it revolves, effortlessly turning them into Swiss cheese. But, what happens when you deploy the revolving brrrr machine of death on top of a Bertha truck?

Well, rather than turning the Sentry Gun into a portable revolving brrrr machine of death, as Reddit user u/AdamMarsdenUK discovers, the Bertha has a slight spasm. Initially, the player’s evil scheme looks to bear fruit, as the turret is neatly plopped on top of the Bertha’s driver’s caddy.

However, as soon as the player hops behind the wheel, the Bertha begins to glitch around the terrain, levitating up a tree before flipping onto its back like a big trucking turtle. Oh, and then it explodes, of course, miraculously leaving the Sentry Gun intact, albeit upside-down and quite useless.

This doesn’t seem to be an isolated interaction, either. u/BSname48294 also got the same result as the original poster, despite opting to place the Sentry Gun on the bed of the truck instead.

Sentry on the Bertha they said… from CODWarzone

Whether or not this is an intended interaction to prevent drive-by lasering or not, it’s nonetheless a super amusing example of Warzone physics gone wrong. With Raven Software having more pressing issues to fix, such as purging those pesky players who magically acquire Sentry Gun-like aim, we’ll be surprised to see this janky interaction remedied any time soon.