It’s been a while since we had a proper easter egg hunt in Call of Duty: Warzone, and the Season 5 Reloaded update seems to have finally given us one involving the Warzone Red Doors, secret codes, and graveyards.

We’re not totally sure if this new easter egg is meant to be live yet, or if it is a mistakenly-released part of the Season 5 Reloaded event ‘The Numbers’, which drops on September 21. Either way, there’s a cool puzzle in Warzone right now, and it’s already been cracked by one of Warzone’s top sleuths, ‘Geeky Pastimes’.

If you want to try and solve this yourself, spoiler free, then all we suggest is that you listen out carefully for the numbers Stitch now reads out in the Red Door stations. If you don’t care for that and just want to complete the easter egg and grab the rewards, then read on for a step by step walkthrough to how Geeky Pastimes cracked it.

Here’s how to solve the Warzone Red Door easter egg in Season 5 Reloaded.

The new graveyard easter egg in Warzone Season 5 Reloaded was cracked by listening to the number sequences read out by Stitch in the Red Door stations. Each station has a different sequence of numbers. Each number corresponds to a letter of the alphabet, e.g. 1 is A, 2 is B, etc.

Geeky Pastimes managed to visit all of the Warzone Red Door stations with his teammates, and noted down the numbers being read out in each one. After decoding the number sequences into words, he then placed the stations in alphabetical order (Alpha Station, Bravo Station, etc.) to form a cryptic message: “Lay the king to final rest above the bones of six feet depth.”

After some exploration, it was discovered that in front of a tombstone in the centre of the Verdansk graveyard (northeast of Boneyard, south of Superstore), a prompt would appear reading: ‘???’. Interacting with it then creates a digging noise and dirt is thrown up, but nothing happens.

To actually dig up the loot buried beneath this tombstone, you’ll need a specific weapon blueprint. The blueprint is called Lost Lion, and it’s a variant of the Cane melee weapon. When finding it as loot in Warzone, it will also be described as The King.

But how do you get it? Well, when you go through a Red Door, you’re taken to the corridor with five more Red Doors. Walking up to each one triggers a voice line. Four will be Stitch voice lines, and one will be Adler. Go through the Adler door, and you’ll be taken to a station. Inside one of the chests in that station will be the Lost Lion blueprint.

Once you have a Lost Lion blueprint equipped, head to the tombstone and dig at the grave again. Now you will be rewarded with your loot, and a Challenge Complete banner will appear on screen as well. 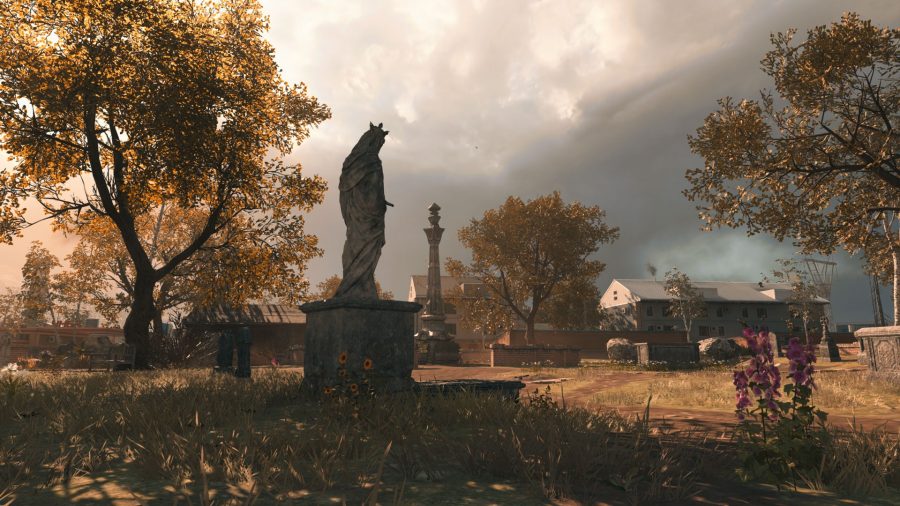 If you’re working as a team, there is something to be aware of: you can’t just pass the Cane around your team for each player to dig and get the rewards. Each member of the team must go through a Red Door to find their own Lost Lion.

So, in short: Find a Red Door, go through the Adler Red Door in the corridor, pick up the Lost Lion Cane blueprint, head to the graveyard, and dig in front of the tombstone shown in Geeky Pastimes’ video.

For completing this easter egg, you will receive $5,000 in-game cash per player (so it’s worth doing every game for some free wonga), and a new Calling Card.

Whether this is an intentional easter egg or not, it’s a great little puzzle to solve and is a good way to get some extra cash for your team. Big props as well to Geeky Pastimes for cracking this one so quickly.