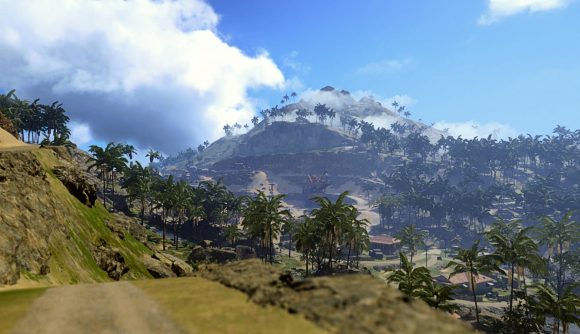 After multiple reports suggested that Call of Duty: Warzone would be getting a new, World War 2-era map, set in the Pacific, to coincide with the release of Vanguard, Raven Software has today confirmed those reports to be true – and has given us a first glimpse at the new Warzone map.

In one of the closing segments of today’s Vanguard multiplayer reveal, Raven’s associate creative director, Amos Hodge, confirmed that a new map would be coming to Warzone “shortly after the launch of Vanguard”. We are then treated to lots of gorgeous panning shots of the new map, which looks to be a stark contrast to Verdansk.

On a purely geographical basis, the new Warzone map looks incredibly mountainous and packed with lots of dense jungle areas, as well as more open areas too. In the footage we see rivers, waterfalls, caves, beaches, and what looks to be a large – and for now, dormant – volcano. It could be a standard mountain, but looking at its jagged top and considering we’re in the Pacific, a volcano seems likely.

In terms of points of interest, we spotted mines, some form of neon-lit building called ‘Royal’ (likely a casino or hotel), hilltop villages, a large bridge crossing a river bed dotted with small shack-like buildings, some kind of industrial plant or refinery, a tall radio tower, and much more.

The look of the map also hints at several methods of moving about. While we see none of them in use or in motion, the teaser footage shows a tram and tram lines, train tracks, and ziplines. With most of these featuring in Verdnask or Verdnask ‘84, it’s certainly not out of the question that they’ll reappear in Warzone Pacific.

Hodge says that with Warzone Pacific, Raven wants to create “an atmosphere that is vibrant, alive, and really opens the door to how we can craft narratives and events.”

🌴We are going to THE PACIFIC🌴

A new #Warzone map will launch later this year!

As well as a look at the map, there was reconfirmation that an anti-cheat system would launch with Warzone Pacific on day one, and that it will run off of the same game engine as Vanguard to make for easier and more seamless weapon integration.

While we’re yet to get a firm date on when Warzone Pacific will release, expect it around late November. This is when the first season of content for Vanguard is speculated to launch.

The new Warzone Pacific map certainly doesn’t appear to cling on to too many of the aspects that made Verdansk such a popular, but also repetitive, battleground. Aside from the small Rebirth Island, this is our first taste of large-scale Warzone gameplay in an entirely new arena, and it’ll be intriguing to see how it plays out.