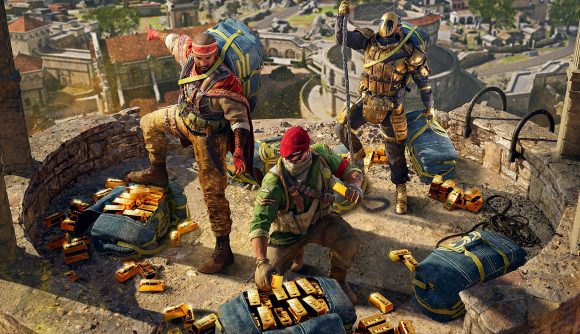 Call of Duty Season 4 has arrived, and with it comes a shiny new map in the form of Fortune’s Keep – a hideaway for gold-grabbing mercenaries on a quaint island in the Adriatic Sea. It’s not just gold bars that are plentiful on this new Warzone map either – there are plenty of easter eggs to uncover as well.

In a very short amount of time, several of these new secrets have been discovered by players. While a lot of these are fun new ways to earn yourself some extra loot, there are some more obscure ones as well.

The first involves two things the Call of Duty franchise is very well known for: zombies, and the classic ‘Press F to pay respects’ meme. In the graveyard in Fortune’s Keep, performing a series of actions will spawn a zombie, which can be killed and will drop some useful items like self-revives for your squad.

As spotted by Call of Duty easter egg hunter ‘Geeky Pastimes’, all you have to do is light three candles around the graveyard by interacting with them, and then walk up to a headstone that should give you the interact prompt of “Pay Respects”. Doing so will see you give a quick salute, and a zombie will claw its way out of the dirt in front of the headstone.

Another easter egg uncovered by Geeky Pastimes will open up a secret room containing some tasty looking weapon blueprints, decked out in the black and gold theme of this season.

This Warzone easter egg involves picking up wine bottles that are scattered around the Terrace POI, and then placing them on a shelf next to the long banquet table in Keep. Placing all the wine bottles triggers a secret door to open (yes, it’s the shelf that slides open, because of course it is) which reveals a secret stash of weapons. Not only will you find some high-rarity weapons, but you’ll also find a black and gold riot shield and a throwing axe melee weapon named Skål Crusher.

‘McfishMr’ on Twitter also discovered that dropping cash into one of the fountains at Winery will cause a celebratory flare to shoot out of the water feature, and it will spit out a weapon – the more cash you drop in, the better the weapon you get in return.

New Easter Egg in #Warzone drop money in here and get free loot. The more money, the better loot. Here’s a free perk. This is in Winery @RavenSoftware @ModernWarzone pic.twitter.com/PiXAiz6Ib5

Fortune’s Keep was always bound to be stuffed with secrets, and there are probably still a few more secret mechanics and easter eggs to find. As well as being a bit of fun, there’s also the chance you can get decent items or some of the best Warzone guns from completing these easter eggs, so they’re definitely well worth doing.