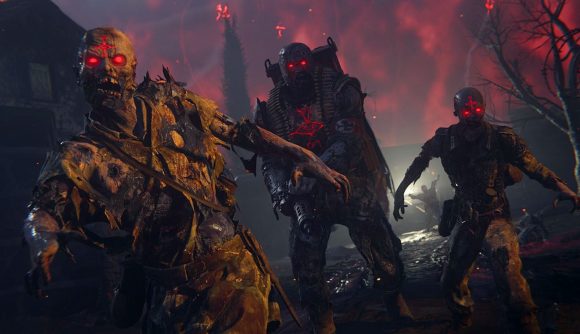 It may not be Treyarch’s turn to lead the development of this year’s Call of Duty game, but it is lending a considerably big hand to Sledgehammer Games for Call of Duty: Vanguard. The studio is not only helping out with the Vanguard ranked mode, but it’s also commandeering this year’s Zombies offering – and it’s just dropped a ton of information on what’s new this year.

First up, Treyarch confirms the abilities of the four Artifacts – the rare items that are each tied to one of four Dark Either deities. The Artifacts are called Dragon of Saraxis, Mask of Bellekar, Sword of Inviktor, and Horn of Norticus: Summons, and each possess a unique power. A lot of these are similar to the Field Upgrades that we saw in Black Ops Cold War, and that are returning to Vanguard Zombies, but with far more powerful effects.

Players will also have access to 11 upgradeable covenants at launch. These covenants act similarly to perks, but are not obtained with traditional points. They are instead bought and upgraded via the Altar of Covenants using a currency called Sacrificial Hearts. Sacrificial Hearts are obtained by completing some of the many objectives scattered around the Zombies experience on offer at launch, Der Anfang. We’ve got a dedicated guide showcasing all the Vanguard Zombies covenants and their abilities.

Of course, it wouldn’t be Zombies without fan-favourite perks. While the effects and logos of classic perks like Stamin-Up or Juggernog will remain largely similar, they’ve been given a World War Two, demonic makeover to tie in with the setting and lore. Out with the vending machines, and in with the stone fountains. Here you can find the five Vanguard Zombies perks that are available in Der Anfang and what they each do.

Interestingly, Treyarch is shaking up how you get and lose perks in Vanguard Zombies. All five perks are upgradeable, and upgrading to each tier will cost you more and more points. However, the base version of each perk will be available for free. As soon as you’ve unlocked the section of the map containing that perk’s fountain, you can walk up and chug it down free of charge.

The next chapter of the Dark Aether story arrives Nov. 5th in #Vanguard Zombies.

When you are downed, you will also not lose the base version of the perks you’ve acquired. You will, however, lose one tier of upgrades from each perk you have. So if you’ve splashed all your cash on Tier 4 upgrades for your perks and are then clobbered by a zombie, you’ll be left with Tier 3 perks (and an empty wallet) when you are revived.

A new weapon rarity system is also being rolled out, whereby different coloured rarities amount to which Pack-A-Punch stage a gun is at. White guns are standard, un-PaPed weapons, blue are PaP Level 1, Purple are PaP Level 2, and Orange are PaP Level 3.

Pack-A-Punched weapons can also drop from the Mystery Box or high-level enemies, so keep an eye out for them!

There’s a load more info in Treyarch’s extensive blog post, but those are the highlight gameplay changes coming to Zombies for Vanguard.