The Type 100 began its Call of Duty Vanguard life as a bit of a headache for developer Sledgehammer Games. A broken interaction between the Vital proficiency and Large Calibre rounds quickly turned the Type 100 and STG44 into two of the best Vanguard guns available, with both being able to two-shot targets in the chest.

Now that things are once again working as intended, it’s time to find a new Vanguard Type 100 class that can go toe-to-toe with current top dog SMG, the MP40. Fortunately, we think we’ve found it after both scouring the web, and much trial and error on our end.

At stock, the Type 100 is a solid-enough SMG. It hits hard, is decently accurate, and remains effective from deceptively far away. Of course, it has its setbacks – mostly the fact that it can kick like a particularly unhappy mule. This Vanguard Type 100 class, then, revolves around getting this bucking bronco under control, while maximising the things it does best.

Without further ado, here’s the Vanguard Type 100 class you should be taking into small or medium-sized maps right now.

With recoil control being a major stat we’re targeting with this build, we can use the Mercury Silencer to help keep the Type 100 under control, while making it a dead silent shredder at the same time. 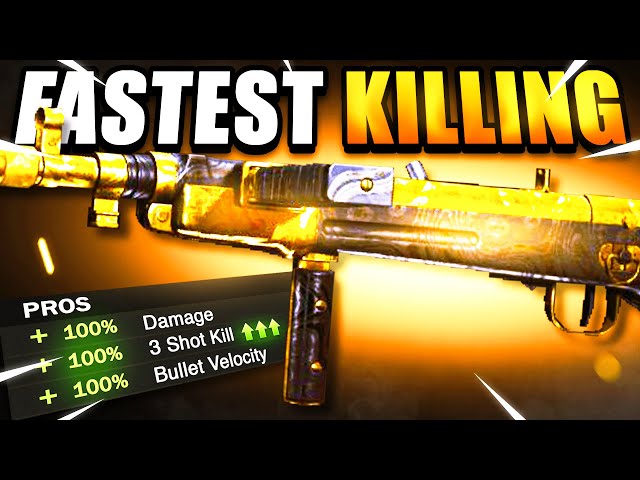 To help bolster the Type 100’s effective range even further, and amp up its fire rate for even faster kills, opt for the Warubachi 134mm Rapid as your barrel of choice. But that’s not the only Warubachi attachment you should include in your Vanguard Type 100 class. Utilising the Warubachi Skeletal stock will give a solid boost to mobility, as both sprint to fire and movement speed are bolstered.

The .30 Russian Short 30 Round Mags are absolutely key to making this Vanguard Type 100 class so lethal. Bullet velocity and penetration, damage, and range all receive a huge boost. Yes recoil control and accuracy take a big hit, but that’s what most of the other attachments in this build are here for. While the larger calibre rounds provided by these mags don’t hit as hard as they did when the Vital interaction was still around, they remain the best option for this weapon by far.

As for what you should load into these mags, you have a couple of options. We like Lengthened as increased bullet velocity equals quicker kills, though Hollow Point is more consistent if you like to spray and pray a bit more. Fully Loaded is a great kit choice here, as it ensures you always have plenty of rounds to spare on spawn.

Finally, Vital still remains the optimal proficiency post-nerf, especially when you’re going for those dropshot headshots. Having increased critical zone sizes will certainly make the difference if you tend to send a few rounds into the upper-chest while you’re adjusting your aim mid-drop.

‘But what about optics?’ you ask. Well, to be honest, the Type 100’s stock iron sights are some of the best in the game, and we’ve had plenty of joy using them. As such, we’d recommend using what you feel most comfortable with, prioritising sights which work best at short-to-medium distances.

Et voila – one suitably monstrous Vanguard Type 100 class. Though the post-nerf Type 100 won’t be beaming players quite as well as it did when it was utterly busted, we’re pretty confident that you’ll find more than enough success with it by your side.