As we enter another November, that means we have a new Call of Duty game. With Call of Duty Vanguard invading our screens from November 5, players will be taking a trip back to World War 2, with Sledgehammer‘s latest take on the famous war and time period.

Complete with a full campaign, more than 15 multiplayer maps at launch and a new Zombies experience developed by Treyarch, the game is rammed with content to check-out. This isn’t even including the Warzone Pacific and Vanguard integration, which will bring dogfights and an entirely new locale to the Battle Royale game. But, not everyone can afford to splash out for a new Call of Duty every year. So, is Call of Duty Vanguard coming to Game Pass?

While none of Activision’s previous Call of Duty games have come to the service, read on to find out what the chances are of a Call of Duty: Vanguard Game Pass release.

Call of Duty Vanguard is not currently available with Game Pass. However, the game may come to Game Pass in the future as Microsoft has announced that Activision Blizzard games will come to Game Pass after their acquisition deal closes in June 2023.

That covers Call of Duty: Vanguard on Game Pass. While this first-person shooter won’t be joining the service, check out some of the other Game Pass games available on consoles right now. 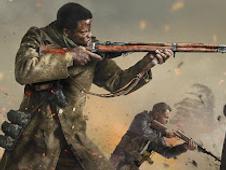