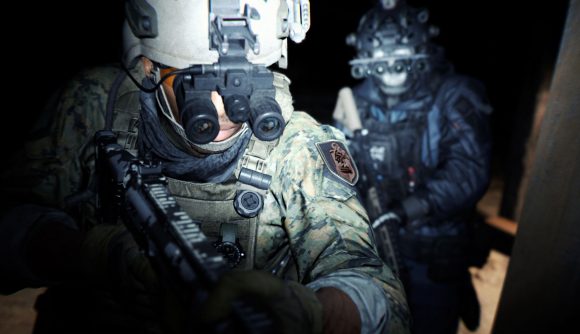 Call of Duty Modern Warfare 2 will not be continuing one of the most debated and divisive gameplay elements from the current multiplayer offering, Call of Duty Vanguard, a lead developer has confirmed.

Speaking to GamesBeat during a Modern Warfare 2 media event, game director Jack O’Hara says that in multiplayer modes, Infinity Ward will be “dialling back” environment destruction in its maps. Vanguard championed environment destruction with the inclusion of things like wooden barriers, boarded up windows, and glass panels that could all be progressively destroyed, with the intention of gradually creating new lines of sight and routes as a match progressed. While some enjoyed this new addition, there were plenty of others that did not – including the majority of the competitive Call of Duty scene.

O’Hara also says that while having realistic destruction is something Infinity Ward would be willing to try, right now it is just too complicated and goes against the studio’s philosophy when it comes to multiplayer map design.

“We’re definitely dialling [destruction] back in multiplayer,” he tells GamesBeat. “Philosophically we like a little bit more of the consistency. We’d love to go to a world where everything is destructible, but from a design language perspective, it just gets a lot more complex.”

O’Hara does say that there will be some surface-level destruction, which should show where key battles have been taking place and add some realism, but this will not alter the layout or flow of the map like Vanguard’s destruction system.

If the leaks are to be believed, Modern Warfare 2 may also end up with a map editor, where players can adjust the blocking, spawns, and objective positions of a multiplayer map. Having destructible elements in maps would likely make this community-led editing harder. Take this observation with a grain of salt though, as this is yet to be a confirmed feature for MW2.

While multiplayer will avoid having destruction in its maps, there will be some more meaningful destruction in the single-player campaign, Infinity Ward has clarified.

If you’ve been yearning for a Call of Duty multiplayer experience where you’re not constantly getting shot through wooden walls, the Modern Warfare 2 release date probably can’t come soon enough. Fear not though, as at some point this summer, you’ll also have a Modern Warfare 2 beta to enjoy as well.