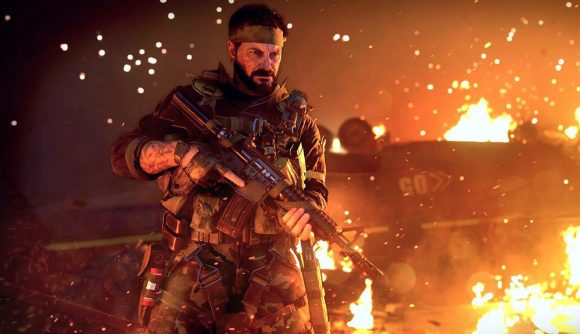 Leaked footage of Call of Duty: Black Ops Cold War’s multiplayer has been circulating after it accidentally went live on a streamer’s Twitch channel.

The gameplay, which sees a bunch of well known creators and pro players competing in a brand new multiplayer mode called VIP Escort, was broadcast on Doug ‘DougIsRaw’ Wolf’s Twitch channel for around seven minutes, according to PCGamesN. This looks to be an unintentional move from the streamer, who was playing alongside the likes of ‘BobbyPoff’, Tyler ‘TeeP’ Polchow, and Atlanta FaZe pro Preston ‘Priestahh’ Greiner. There’s been no explanation so far as to how the footage went live on DougIsRaw’s channel, but community members are speculating this was capture event gameplay that was intended to be streamed to a private server for content purposes.

The gameplay gives us a really good look at how multiplayer will operate and feel in Black Ops Cold War, prior to the full multiplayer announcement next week on September 9.

We see the map Miami being the stage for the game of VIP Escort, a no respawn, Search and Destroy-like mode with a defending team looking to stop the attackers extracting a ‘VIP.’

We got a look at some of the weapons that will be in the game, which includes some Black Ops classics like the AK-47u.

There also appears to be an all new loadout system that can see you run up to six perks at once. Perks include familiar names like Ghost and Flak Jacket, as well as some never before seen names like Quartermaster – although this could just be a new title for Overkill.

The four minute clip above shows some of the action that went down on DougIsRaw’s unintentional stream, but expect to see a lot more of that content flood YouTube and Twitch on Septmeber 9 when the lid is finally lifted on Black Ops Cold War’s multiplayer.