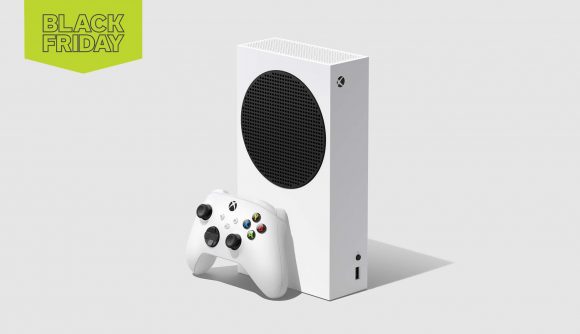 With Black Friday upon us, there are few better times of the year to grab a bargain. This year, it looks like we’re being treated to the mythical unicorn of gaming deals – a current gen bundle price drop. That’s right, for UK residents this is the week for buying an Xbox Series S if you’ve quietly been quietly biding your time, waiting for a dip on Microsoft’s latest console.

So far, we’ve found two solid bundles on Amazon that have had a few quid knocked off of them. If you’ve been eyeing up the Eivor experience, then you can pick up Assassin’s Creed Valhalla with a Series S for only £294.99 – that’s a £14.99 saving.

While you only get the base game as part of this bundle, Eivor’s journey through ninth century England will still take you anywhere from 50-60 hours to complete. Needless to say, you won’t be running out of content any time soon.

However, if you don’t dream of living out the existence of a viking assassin, then you can save a whole 10% on a Series S bundled up with the unmissable Turtle Beach Recon 500 Arctic Camo headset.

Featuring beefy 60mm dual drivers, AccuTune acoustics, and a removable noise-cancelling microphone, there is a lot to like about the Recon 500s on paper. Coming in at just £284.99, a cool £34.99 has been knocked off the retail value of this second bundle.

Whether you opt for one of the best Xbox Series X games out there right now or a swanky new headset, you can’t go wrong with a brand new console and a few bob saved.