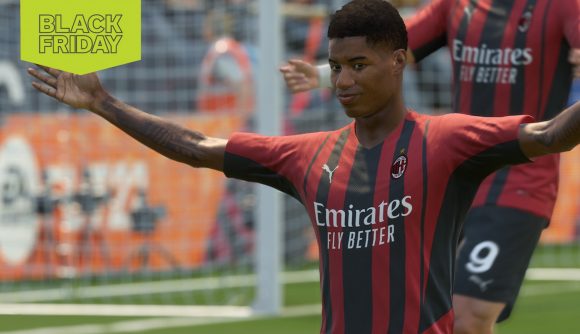 The nights are longer, the air colder, and Black Friday is basically upon us. Though we are technically still a few days away from the day itself (November 26th), the majority of retailers have already started dropping their prices in anticipation of the biggest sale of the year. If you were hoping to nab a few bargains and expand your Xbox library, now’s the time: FIFA 22 and tons of other fantastic Xbox games are now up to 57% off in Amazon’s Black Friday deals.

For most, FIFA 22 will need no introduction, but the latest instalment in EA’s long running footie franchise takes the framework of FIFA 21 and polishes it up to provide a really smooth and enjoyable virtual pitch experience. We’d even go so far as to call it the best competitive FIFA game we’ve played in years, but read our full FIFA 22 review if you’d like to find out more. If you played and enjoyed a FIFA game in the past, we definitely recommend that you pick up this latest game while it’s available at 57% off – that’s a discount of $33.99.

But FIFA is just one of the many recent Xbox games to have received substantial reductions in the Amazon Black Friday sales. Fans of sports games will be particularly pleased, as not only is FIFA on offer, but Guardians of the Galaxy can be picked up for just $25. Fans of epic RPGs can grab Mass Effect: Legendary Edition at 37% off and those who prefer FPS games can get Far Cry 6 at 42% off.

There’s a really good variety of games on offer and we’re sure that these deals present an opportunity many gamers won’t want to miss, and as none of these games are currently available on Game Pass, this might be the best price you’ll see for a while.

We’ve only mentioned a few of these fantastic deals above, but we’ve gathered a selection of the best offers for you below. Keep in mind that many of the deals mentioned are not available in the UK.

It’s not stated how long the deals on the best Xbox Series X games will run for, so don’t take too long to make a decision or you might miss out. If you want to find more bargains like this, check out our Black Friday console gaming deals guide.