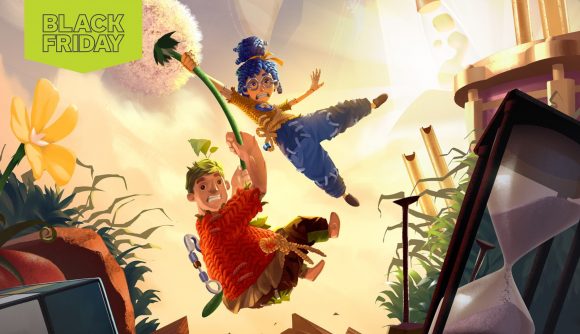 If you thought all the deals were done for the week, you’re wrong: Cyber Monday has just begun and it’s jam packed with gaming goodness. While there are dozens of discounts on some of the best Xbox Series X games and the best PS5 games worldwide, there’s one in particular that’s caught our eye: It Takes Two.

This wonderful co-op game, created by the developers of A Way Out, is a must-have for couples or families looking to get some game time in together this holiday season. While the game’s themes are somewhat emotional – It Takes Two focuses on a child coming to grips with her parents’ divorce – the addictive gameplay and the requirement for players to work together to achieve great things is honestly incredible.

The game is heavily discounted right now on both Xbox and PlayStation and it’s so good that you’ll find it on our list of the best 2 player Xbox games.

The game can be played either online or couch co-op, but if you’re home alone this Winter – don’t worry, the game comes with a Friends Pass so you can enjoy the game with someone online for free.

It’s unlikely the deal will run for much longer, so if you’re interested get in quick. There are also deals on other games, like Mass Effect: Legendary Edition, Ratchet & Clank: Rift Apart, and Psychonauts 2.