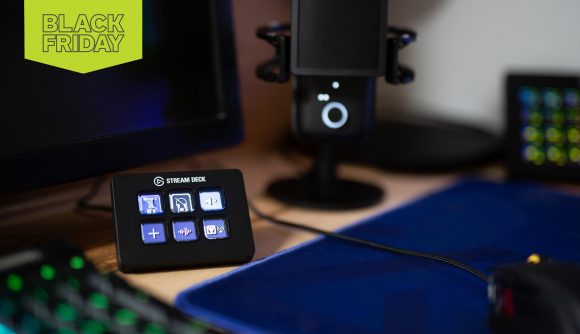 Streaming can be an expensive hobby. In an overly-saturated market, streamers are doing more than ever to up the quality of their content, and stand out from the crowd. If you’re looking to upgrade your setup, you’re in luck. One of the biggest players in the streaming gear market, Elgato, is currently having a monster sale on some of its most popular products on Amazon – both in the UK and the US.

Right now, if you’re in the US, you can save up to 20% off the exceptional Elgato Wave:3 USB condenser microphone – which found itself a home in our list of best microphones for streaming. Down from $149.99 to $119.99, this is an absolute bargain if you want a great-sounding microphone that comes bundled with its own mixing software. It’s even better if you’re in the UK, as you’ll be able to pick one up for just £99.99 – down a whopping 38% from its £159.99 price tag.

Meanwhile, if you’re looking for a shiny new Elgato Stream Deck, then you can get the first generation of the product for a meaty 33% off in the States, shearing $50 off its $149.99 RRP. UK shoppers do lose out here though, as Amazon UK has only knocked it down a tenner.

You can check out the full list of Elgato Black Friday deals below, which also includes the Key Light Air (UK only), Key Light (US only), Wave shock mount (US only), HD60 S+ capture card, and green screen. It looks like Elgato will also be discounting the 4K60 Pro MK.2 capture card (up to 20%) and ring light (up to 25%) when those deals start on November 27 – so be sure to check back then.

With plenty of bargains to get in on, you’ll be able to step up your streaming game considerably cheaper than usual. So definitely take advantage of these savings while you can.