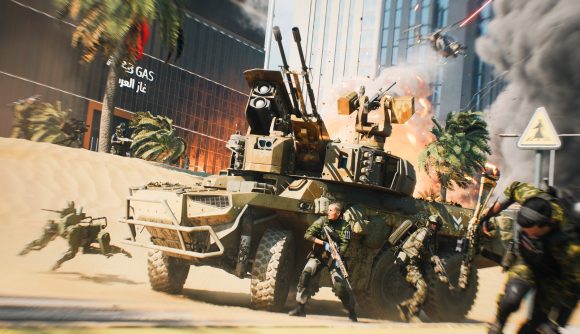 While EA yesterday aimed to give Battlefield fans something to smile about by revealing its ambitious plans to create a “connected Battlefield universe”, there’s sadly no hiding away from the fact that Battlefield 2042’s first few weeks have been littered with problems.

Launching without legacy features like in-game voice chat or end-of-match leaderboards, it has certainly been a disappointment to many long-time fans of the series. It’s clear that EA is looking to change things though, cramming each Battlefield 2042 update so far with hundreds of hot fixes and improvements. However, it’s also turning to players for help in identifying the game’s weak spots.

Shortly after EA’s Battlefield universe announcement, Battlefield 2042 players began receiving satisfaction surveys via email. As well as asking whether players would recommend or discourage friends from playing 2042, it also looked to get feedback on pretty much every aspect of the game.

Requiring players to score on a scale ranging from “very satisfied” to “very dissatisfied”, the survey looks for thoughts on areas such as the increased 128-player count, map size, weapon balancing, destructibility, the new Plus menu for weapon attachments, and much more. In this section of the survey alone, 24 separate features were listed.

There was also a section set aside solely for players’ opinions on Battlefield 2042’s specialists. Those surveyed were asked whether they believed specialists worked well together, whether they complimented each other’s abilities, and whether they each have a clear and distinct role.

Players were also asked if they had encountered much toxicity or cheating in Battlefield 2042, as well as a few questions around EA Play and its benefits.

While it’s clear that the feedback will be used to further improve the game in the coming weeks and months, this survey is yet further proof that the modern and ambitious vision for a Battlefield that pushes the boundaries far beyond the games before has so been wide of the mark..