Are you sick of running out of ammo in the heat of battle? What you need in your life is the best LCMG Battlefield 2042 loadout. This LMG-focused loadout, which takes into account range, bullet velocity, and recoil, will turn you into the ultimate support player online.

The LCMG is one of the best Battlefield 2042 guns right now, simply because of the amount of ammunition types it offers. This gun can take down infantry, either out in the open or hidden behind soft surfaces, as well as armoured vehicles. Honestly, if you’re not playing with it, what are you doing?

The best LCMG Battlefield 2042 loadout isn’t particularly difficult to attain either. Since the LCMG is a starting gun, you can work your way through the upgrades fairly quickly, giving you a beast of a weapon that’ll have your team taking sector after sector. If that’s caught your attention, read on for how to set up the LMG to perfection.

The LCMG is by far the best LMG in the game at the moment and for good reason: it has a lot of firepower, it’s accurate, and it’s got a decent amount of range. To make the best out of the gun though, you’re going to want to tweak your plus menu.

For the sights, we’d recommend having the Bravo 3x as your default. This mid-range optic is one of the better ones, giving you increased range and target visibility. While it does reduce your ADS time, a quick switch to the Fusion Holo will sort that right out.

As for ammo, well you’ve got a lot more choice than most of the other weapons. While Standard Issue / Extended Mag is your best bet for standard engagements, having something like Armour Piercing as your second option will be handy for when the pesky hovercrafts arrive. This ammunition type penetrates vehicle armour and light materials, but it does so at the cost of infantry damage.

Mount wise, we’d recommend the ADR Bipod, which improves your recoil control and sway stability while deployed. If you’re on the move, the LS-1 Laser Sight is probably a good option.

The Extended Barrel is our option for the last slot, which will increase your projectile velocity at a small cost to rate of fire. As a secondary option, the Warhawk Compensator is your best bet. 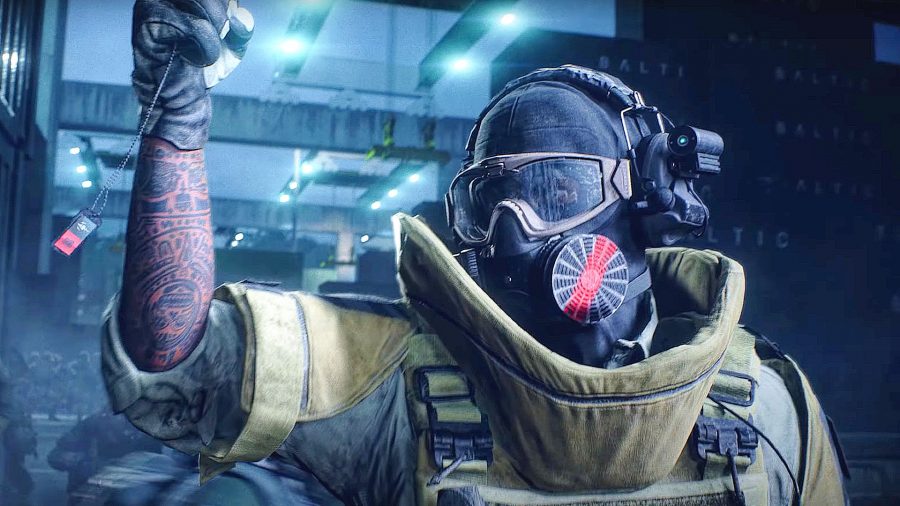 Obviously, the LCMG is a very beefy LMG, so if you’re wondering what gadget to pair with the best LCMG Battlefield 2042 loadout, there are a couple of options.

The first is the Ammo Crate, simply because if you’re providing suppressive fire, you’re going to need some extra rounds. The other, the IBA Armour Plate, should give you a bit of extra protection which is useful if you’re planning on attacking an objective.

With ten Battlefield 2042 specialists in game, finding the right one that suits you and your playstyle can be a bit of a nightmare. While there’s no right or wrong answer to who you should pick to carry the best LCMG Battlefield 2042 loadout, there are couple that might be more suited to it.

Boris, Angel, and Irish are all good options for this loadout as they all carry super handy gadgets. Boris’ sentry will soften up your enemies for you, Angel’s loadout crate, which provides armour, ammo, and loadouts, is a valuable asset to your team, and Irish’s Fortification System will give you some protection in heated battles.