Is the SWS-10 not cutting it for you in Battlefield 2042? You’re not alone. Fortunately for you, with a little bit of grinding, there’s a lightweight rifle around the corner that’ll stop someone dead in their tracks: the DXR-1.

The best DXR-1 Battlefield 2042 loadout combines all the best attachment you can find in game to create an overpowered bolt-action rifle that won’t miss a beat. While this rifle doesn’t quite have the range of some of the others in game (it’ll only kill someone instantly at a maximum of 800 metres), it’s undoubtedly one of the best Battlefield 2042 guns.

So how do you set up the best DXR-1 Battlefield 2042 loadout? Read on to find out what attachments we’ve slapped on this bad boy, what gadgets we’d recommend pairing with it, and which specialist you should play as in the heat of battle too.

This bolt-action rifle is probably one of the strongest in the game right now, simply due to the fact it has 95-rated firepower. If you’re looking to provide sniping support to your team, the DXR-1 is the gun to pick. Here’s how to set it up.

For sights, we’d recommend picking one long range and one medium range scope. For the former, we’ve opted for the SDB 10x and for the latter, the Raven 4x.

Ammunition wise, the Standard Issue / Extended Mag should sort you out for long engagements, but we’d recommend having Armour Piercing as your second option – just in case things get heated.

As there’s only one mount, you’re stuck with the factory ones for your third slot, but where things get interesting is in the barrel department. Here we’d recommend the Extended Barrel so that you can boost the gun’s bullet velocity. As a second option though, we’d recommend a suppressor to help you stay quiet when you need to preserve your position. The 6KU Suppressor is your best bet here. 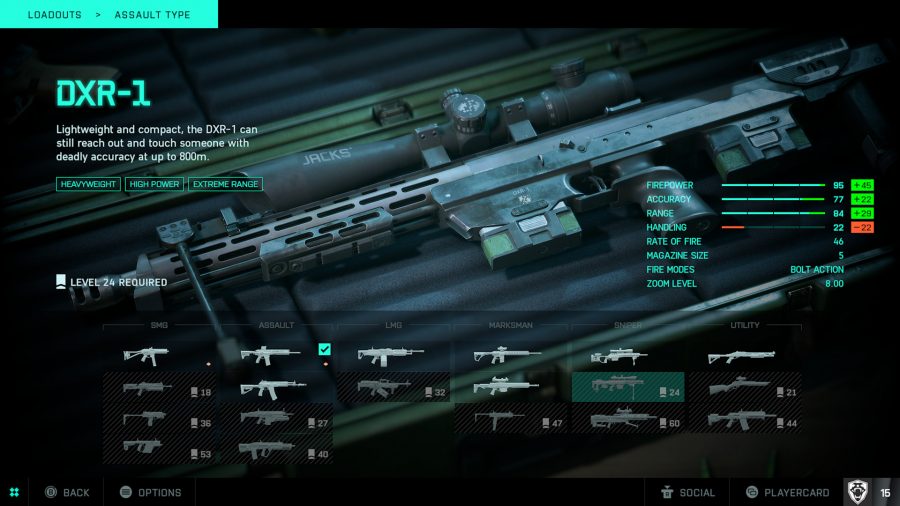 The most useful gadget for the best DXR-1 Battlefield 2042 loadout is the Insertion Point. However, you’ll have to grind to unlock this, so if you don’t have this initially, a standard gadget like an Ammo Crate or Armour Plates will do.

Ji-Soo’s Threat Perception trait, which allows you to see the location of enemies dealing damage to you, is particularly useful, while Casper’s drone comes is handy for when you want to get an overview of the battlefield. Navin’s Trojan Network trait is also handy as hacking targets can reveal enemy positions.