What are the As Dusk Fall endings and how many variations are there? As Dusk Falls is the debut game from Interior Night and it’s made a splash online for making the decisions feel far-reaching and consequential. Every choice you make in this captivating interactive adventure can decide the fate of one of the many As Dusk Falls characters, so you’ll need to bear that in mind as you progress through the story.

Although you’ll bump into a whole host of characters during your stay in Two Rock, the As Dusk Falls endings really only concern the members of the Holt and Walkers families – the two clans who end up clashing in the Desert Diner motel. While the supporting characters certainly have a say in how you reach each of their conclusions, it’s worth noting that you won’t influence their fates in quite the same way.

Below we’ll be going through each of the As Dusk Falls endings, explaining how you can achieve them and what they mean in the wider context. It goes without saying that the details below contain some pretty big spoilers, so if you’ve not finished the game yet, heed our warning and turn back now.

There are multiple As Dusk Endings for Jay, Vince and Michelle, Tyler, and Sharon. Zoe’s actions in the later stages of the As Dusk Falls chapters influence Jay’s story tree the most, Vince’s decisions decide on the fate of both his and Michelle’s future, while Tyler, Sharon, and Paul, influence the Holts’.

Here are all the As Dusk Falls endings for each character:

Jay has multiple endings and these depend on how you act as Jay following the heist and how Zoe reacts to Jay in the final chapters.

Again, there are multiple endings for this couple, given they each have various outcomes throughout the course of the game. One revolves around Vince’s future, one around Michelle’s future, and one around their marriage. These are: 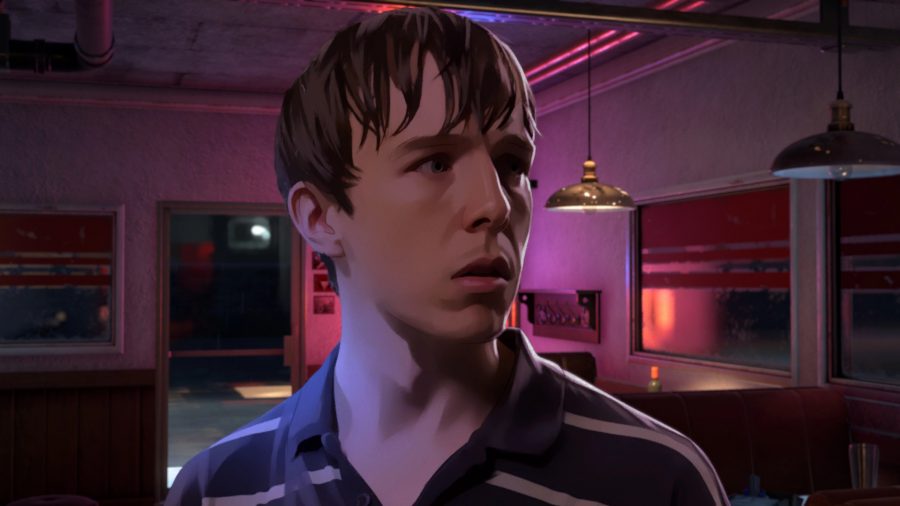 Depending on your actions later on in the game, Tyler can either live the rest of his life in jail for what he did or in hiding. His endings are:

Likewise, Sharon can also live her life free of danger or behind bars, depending on how their escape pans out. Her endings are:

If you look at the story tree, these are the four fates you will find. However, several other characters’ fates are decided during your play through, including Zoe’s. While these aren’t officially recorded as a conclusion on the trees, we thought we’d show you the different outcomes you could have had here.

Zoe’s ending plays out over the course of the second book, especially since this part of the game is largely about her. Her struggle to come to terms with her past comes to a head at college where she begins to question her course enrolment. Zoe will meet up with Jim from time to time, who appears to be struggling with dementia while reporting he’s been burgled by a strange man in black. Zoe, also struggling, notices the same thing – although it’s unclear who they are or what they want.

Later on, Zoe either travels to Canada to confront Jay who’s been sending her letters for the last couple of years. In Canada, you can choose to confront Jay about the past or sympathise with him, ultimately deciding whether to call the cops or him or not. If Jay surrenders, Zoe visits him in prison and watches him be executed.

Dale dies regardless of the path you take. Following the pizza scene in the motel, Vince is taken outside by Dale as a hostage. Here, Vince notices a sniper trains his sight on Dale’s forehead. If you fail to warn Dale, he dies there and then, but if you do warn him you’ll get a bit more time with him before he’s ultimately shot in a standoff with police.

If Bear is still alive at the end of the game, he will put flowers on Dale’s grave.

You can end As Dusk Falls with Joyce alive or dead. If Vince fails to calm her down in the hostage situation, Tyler shoots and kills her on the spot. If Vince succeeds in calming her down, she later escapes the motel during the fire. 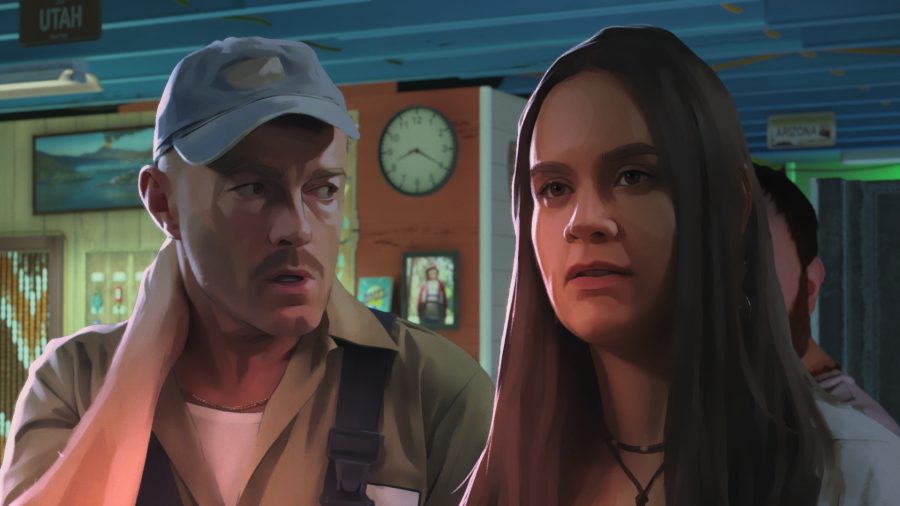 Paul can lead two very different lives following the conclusion of As Dusk Falls depending on your actions. He will either stay in Two Rock and live by himself if Dante arrests Sharon or he’ll live the high life with Sharon abroad after helping her escape.

Dante lives or dies by the sword. If he arrests Sharon, he’ll be able to continue his career – despite the corruption.

Regardless of which decisions you make during the course of the game, nothing seems to affect the final outcome as As Dusk Falls. While Jim is a somewhat complicated character who raises a lot of questions around his earlier years, he still ends up being attacked by the unknown stalker at the end of the game for something that has been left in Two Rock. Who that person is and what it might be over remains to be seen.

So there you have it, all of the As Dusk Fall endings for each of the main characters. As you can see there are still a few endings yet to be discovered, but as soon as we find out what those are and how they were achieved, we’ll update this guide.

In the meantime, though, make sure to check out our As Dusk Falls review for our thoughts on the game and read our guide to setting up the As Dusk Falls multiplayer right here.