Born from former Quantic Dream developers, indie studio Interior Night is behind As Dusk Falls. The game captures the gravitas and weightiness that defines these narrative-centric experiences. However, the combination of that captivating story, unique art style, choices that feel significant, and the parallels it shares with some of the best TV series means that As Dusk Falls exceeds a lot of what has been done before. And, it’s all because Interior Night has broken down the barriers of what an interactive narrative game can be by doing its own thing.

While most interactive games either focus on realism or tell a story with a more stylistic visual framework, As Dusk Falls blends both of these into one.

This results in a beautiful flip book-like game where the real actors who play the game’s characters are filmed in live-action and then painted over to give the game its own visual style. These individual shots of characters are then stitched together in classic comic book fashion that pushes As Dusk Falls into an entirely different category altogether.

And, while you might wonder why Interior Dark didn’t just stick with the tried and tested FMV format, by the end of your six or so hour playthrough, you’ll understand why this creative decision was the right one for As Dusk Falls. 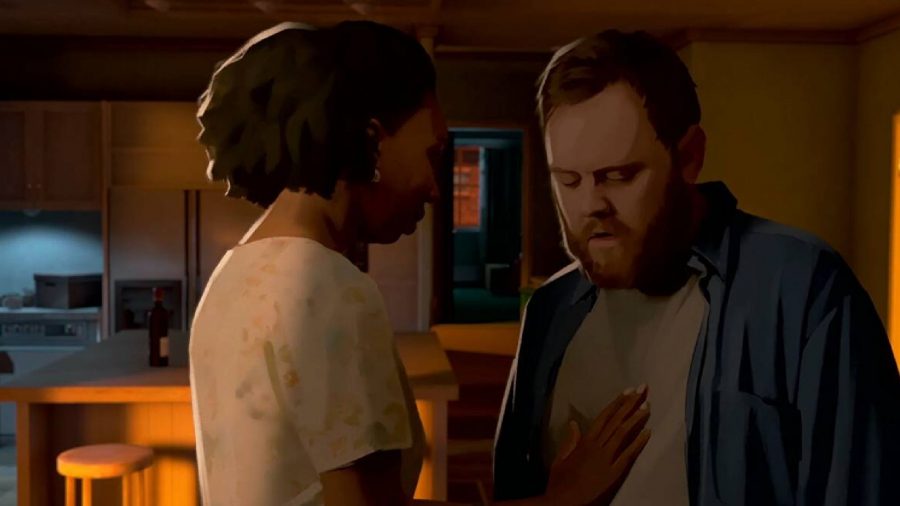 And that’s because it leaves more and more up to your imagination. As I wasn’t directly controlling characters, using simple button prompts and quick time events to navigate through the story, this style forces you to take a step back and fill in the gaps about what a character does in between each action or  dialogue option.

This kept me engrossed through its digestible six chapters and stopped me from looking at my phone or getting bored as a scene played out, which is exactly what creative director Caroline Marchal set out to do. It isn’t restricting itself to the easily accessible styles the genre has used before. Sure, this isn’t for everyone, but if you can get over any reservations you might have, you won’t find a better experience on Xbox Game Pass.

As I experienced this tale of two families, the Holts and Walkers, whose lives become intertwined because of one single day in Two Rock, Arizona, I found myself becoming increasingly more invested in the characters and their paths.

Part of this was down to the excellent cast, who really help sell the serious story of death, loss, and life that As Dusk Falls tells. While some narrative-driven games struggle because their wonky facial animations serve as a distraction, the visual style removes one-half of the problem. And the writing here is just as top notch, helping Marchal to that lofty ambition of bringing crime drama fans into the gaming world. 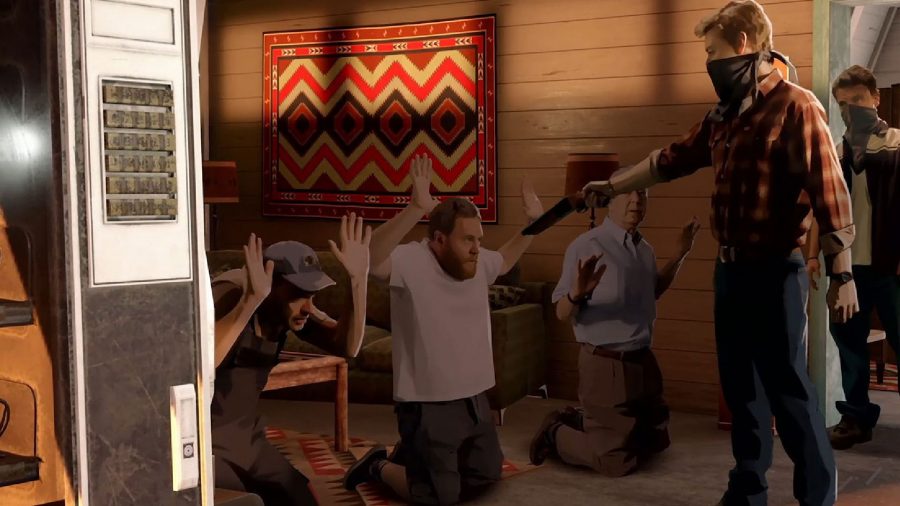 The other reason As Dusk Falls succeeds is that all of the decisions in this incredibly human story feel consequential and far-reaching. From small instant changes to consequences that play out over the course of the game, each decision has a lasting effect on the characters around you and their relationships with one another.

But don’t be mistaken; these decisions aren’t just one-dimensional or black and white. In two separate playthroughs, myself and editor Jess Wells ended up in entirely different situations and that’s because our gut instincts told us to behave very differently as the story unfolded. 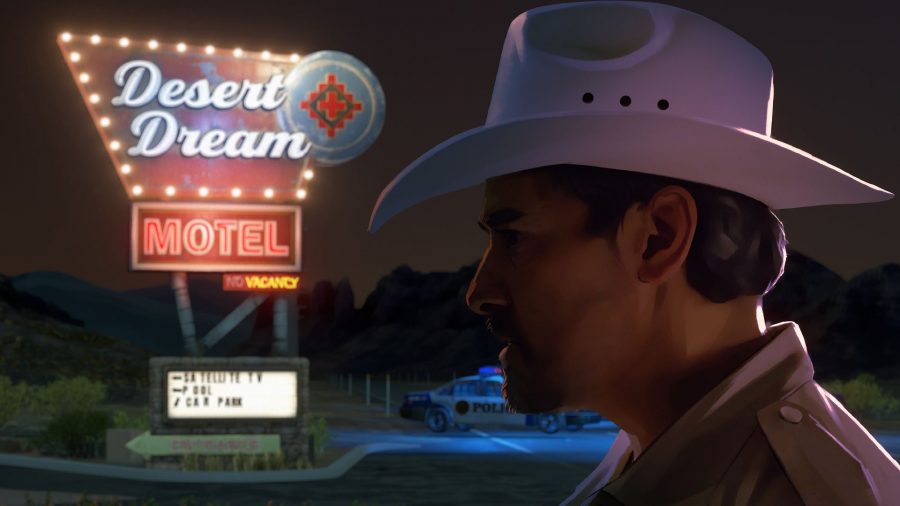 Even simple decisions you make in the introductory chapter have far-reaching consequences and you’ll need to think deeply about every option. For example, in the opening moments of the game, Vince and Michelle contemplate moving their daughter Zoe up a year in school.

I opted to support this decision but it – understandably – influenced her development, making her more of an introvert as the game goes on. And, you can completely miss that option if you opt for a different path too.

It’s clear to see that what Interior Night has accomplished is mighty impressive. This style of game has always struggled to make your decisions feel significant, but the more I think about it, the more I believe  As Dusk Falls might be the first linear game in the genre to actually pull off the promise of a story shaped by your decisions.

The game satiates your appetite for those different choices by presenting an extensive story tree at the end of every chapter that displays how your decisions led to events. It’s the butterfly effect in all its glory, but the greyed-out areas which show the decisions you didn’t make is an impressive show of force that will have you coming back time and time again.

The game even goes one step further by assigning your dialogue choices and actions to traits that give you an insight into how you played the game; whether you were analytical or looking for a fight, loving, or someone who thinks with their head before their heart.

And, these insights stand out because the story in As Dusk Falls is grounded in the human experience. It isn’t tackling any moral themes, it is purely focused on these two families and the events that interlink their lives. And, as such, you can place yourself in everyone’s shoes rather easily because everything you see in game could one day happen to you. 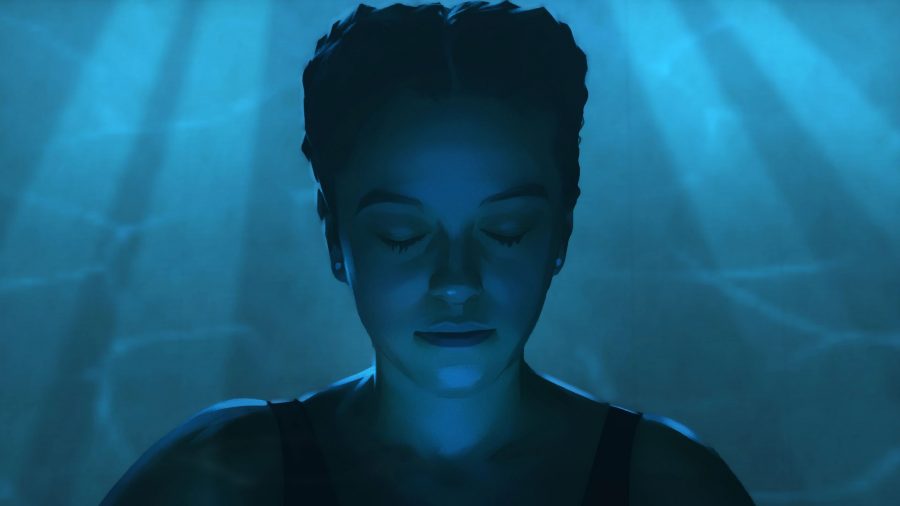 And if you play the game in the way you would have acted in real life, these insights Interior Night provide might well reveal new details about your core tenets. My traits and values were all on the money – despite being put in difficult scenarios – making this arguably one of my favourite parts of the game.

It’s these systems, combined with the stunning story that make As Dusk Falls one of the best in its class. While there might be a few foibles here, the gripping narrative, a cast of relatable characters, consequential decisions, and a unique art style allow the game to shine as one of the best interactive adventures of the year.

As Dusk Falls is a captivating narrative-focused game that grounds itself in human experiences and captures the hallmarks of prestige TV with its acting, writing, and style. A true evolutionary experience in games.