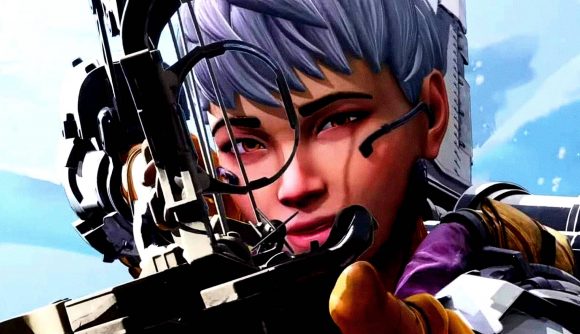 We know it shouldn’t be taken for granted, but it feels like a given that Respawn Entertainment is going to release one new playable legend for Apex Legends per season. With that in mind, Apex Legends’ Season 14 update is on the way and Respawn Entertainment’s latest teaser has everyone online thinking the same thing: ‘Vantage’ is coming to the battle royale shooter next.

At 13:38 PST / 16:38 EST / 21:38 BST on July 21, the official Apex Legends social media account shared an image of four hand-written diary entries with the following caption: ” You’ve got to keep yourself busy when you’re one of the only two people on the planet.”

The diary entries themselves include comments on a person’s “grand-mom”, their experience with saving a small bird from a “tangle of brambles” (and then shooting and eating said bird), and their boredom. While it’s a clear reference to some new character being introduced into the Apex Legends universe – hopefully the new playable legend – it might not be as clear as to why people think this is a reference to ‘Vantage’, who we found out about in some Apex Legends character leaks earlier in the year.

Well, you’ll be pleased to know that there are eagle-eyed data miners and leakers out there with enough information to fill in those gaps. In an update to Apex Legends on June 21, several files linked with the unreleased playable legend ‘Vantage’ were removed from the game – something that data miners have noticed usually happens when the related character is being prepped for release. You can find evidence of that on this Reddit post here.

In addition to this, notable Apex Legends leaker ‘Thordan Smash’ has found a number of cosmetic items relating to the unreleased character – and they’re convinced that they will be available in Apex Legends come Season 14.

Apex Legends Season 14 is 3 weeks away and get ready for a whole bunch of leaks from in game banners and poses from Vantage here, battlepass theme with a reactive to match theme, to brand new updates to improve the game. https://t.co/GmDhO9Zfqh pic.twitter.com/UTe7UWTDoK

Looking at the new teaser itself, as you will be able to see below, it’s clear that the character in question is an adept hunter – there’s mention of hunting, cleaning and dressing a kill, a kill list, and a sketch of a sniper rifle alongside the quote “wish I had some friends or something instead of talking to my gun”.

When you compare this to the leaked ability kit for Vantage, it lines up. Vantage, as a playable legend, is expected to be something of a ‘survivalist sniper’. From what the leaks suggest, her kit includes a passive ability that improves tactical information for players using long-range scopes, a tactical that can offer some sort of reconaissance, and an ultimate that will equip players with a custom sniper rifle.

You've got to keep yourself busy when you're one of the only two people on the planet. pic.twitter.com/qkx6JcXEi8

Of course, this is all educated speculation at this stage – however, it does seem likely that Vantage is going to be the next character to join Apex Legends. The current situation echoes last season’s build-up to the reveal of Season 13’s Newcastle.

Will Vantage make her mark on those dominating the Apex Legends tier list right now? We can only hope; the meta is always changing, but it needs shaking up a little more.

The ALGS has divided Apex Legends fans with Nickmercs’ Pro League invite, but a sniper-based legend that can ID enemies at a distance is sure to be much more of an immediate issue for fans of Apex Legends’ ranked mode.