Imagine trying to practise archery while playing Dance Dance Revolution. As dangerous a pastime as that is, that’s what it feels like to let loose a successful combination of shots with Apex Legends’ Bocek Bow, all while ducking in and out of cover, strafing, and wall-bouncing to bamboozle your opponents.

Some context, perhaps: Apex Legends Season 9: Legacy is fast approaching, and it means that it’s all change in the battle royale game. Players are eager to try out the newest addition to Apex Legends, Valk, whose jetpack shenanigans will add another layer of vertical combat to both battle royale and Arenas modes.

That’s the other big change – possibly the biggest addition to the game since it launched two years ago. Apex Legends’ Arenas mode is a tactical 3v3 shooter similar to the likes of Valorant and Counter-Strike: Global Offensive. While I massively enjoyed jumping in and having a few games in the preview event, I can’t help but feel like most people are missing the other new addition in Season 9: the Apex Legends rhythm game.

I’m serious! While it’s not an official new mode per se, Apex Legends’ rhythm game comes in the form of a new hop-up and it reminds me of the hours spent trying to perfect Paranoia Survivor Max on a disheveled old dance mat. Deadeye’s Tempo can be attached to the Bocek Bow or the Sentinel sniper rifle, two big hitting weapons with a slow rate of fire.

But with the hop-up equipped, if you release the Bocek Bow’s taught bowstring at just the right moment, your next shot will not only charge faster, but also fire at a higher velocity. Keep hitting the sweet spot to continue the fast firing action, and soon the skies will be dark with the shadow of your arrows.

Even just practising down at the Firing Range gets you into a rhythm before too long, but the real fun comes when you take on some real opponents. The worthier your foe, the more complex this little rhythm game becomes, and the harder it is to not break your beat while finding cover, strafing, or otherwise avoiding damage. Left, left, shoot. Instead of tapping pink and blue arrows, your feet are tangoing in the considerably sandier Kings Canyon. Crouch, right, shoot. Your arrows are as rapid as they are true.

The crack of a Pathfinder’s armour is a crash cymbal punctuating the song of your match, and yet you have to keep yourself from getting too excited for risk of increasing your clicks and ruining your rhythm. Your teammates call out that they’re flanking, but you barely hear them, too engrossed in the improvised composition that you are creating, Bocek in hand.

It helps if you sing a little tune while you’re firing. Seriously. Whether you’re a Stayin’ Alive type of person or fancy more of a Superstition-esque beat, singing in harmony with the twang of your bowstring can help you keep the rhythm up while raining down death on opposing teams. Just, you know, make sure your mic’s off, or your teammates won’t thank you for your tuneless rendition of Stevie Wonder. But keeping the beat is crucial, and combining regular bow shots with your normal gameplay is the challenge that will face us all in Season 9. 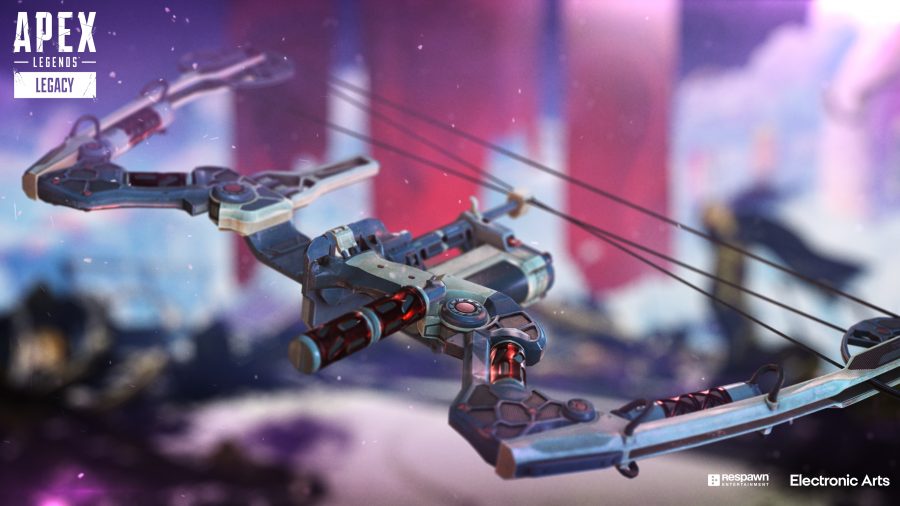 For someone who usually spams the trigger to get off as many Mastiff shots as possible before inevitable doom, delaying my shots to stay on beat is new to me. But there’s a satisfying feeling of control that comes with keeping the beat, control that almost feels like you’re slowing things down despite the fact that your rate of fire is increasing.

Winning an Apex Legends match feels euphoric, but watching the little ‘70’ hit marker pop up over an opponent’s head three times in a row as I try to remember the lyrics to the second verse of Superstition is something else: it’s music to my ears.