When Apex Legends first launched back in 2019, the popular battle royale game shipped with a single map – King’s Canyon. Since then, Respawn has introduced World’s Edge in Season 3, and Olympus in Season 7. Each map has also undergone sweeping changes from season to season.

However, over time, and despite their numerous iterations to remain as fresh as possible, maps begin to wear out, and players start looking to something new. Thankfully, a new Apex Legends map is coming in Season 11: Escape, which will shake things up for casual players and maybe even those trying to climb the Apex Legends ranks.

After plenty of rumours and leaks, the name and appearance of the new Apex Legends map has finally been revealed. It’s called Storm Point, and is set on a tropical island on the planet Gaea, which is home to a deserted research base and some sinister-looking wildlife.

But enough with the talking, here’s everything we know about the new Apex Legends map for Season 11 – Storm Point.

The new Apex Legends map, Storm Point, will come out on November 2, 2021 with the launch of Season 11: Escape.

In the trailer, you can see everything from crystal clear waters, jagged cliffs, and even some roaming wildlife.

Many of Storm Point’s locals won’t be happy to see you, and will do their upmost to make your time on the island as miserable as possible should you choose to engage with them.

There are boons to this though, as blasting through Prowler nests and spider eggs – the spawn points of which are marked on the minimap – will net you rewards like ammo, attachments, and consumables, as well as a small amount of progress on your Evo Shield.

Similarly, the Flyers of King’s Canyon can be observed above Storm Point’s archipelago. Should you sink enough rounds into one of these four-winged beasts, it will reluctantly drop its loot.

Jump Towers have been replaced on the new map, with the Gravity Cannons taking their place. When using this new transportation method, players will have pitch control – allowing them to land either side of the receiver – and will be able to make full use of weapons, abilities, and grenades mid-air. 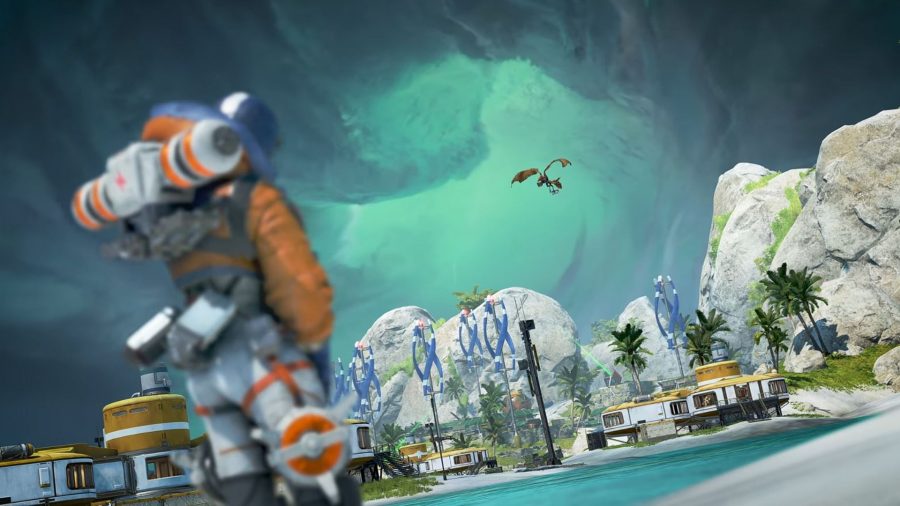 The new Apex Legends map Storm Point may not be out yet, but its POIs have already been revealed by Respawn.

Here are just some of the Storm Point POIs:

And that’s all you need to know on the new Apex Legends map. While you’re waiting for the new Season 11 map, check out our Apex Legends tier list so you know which legends you should be playing when it drops.