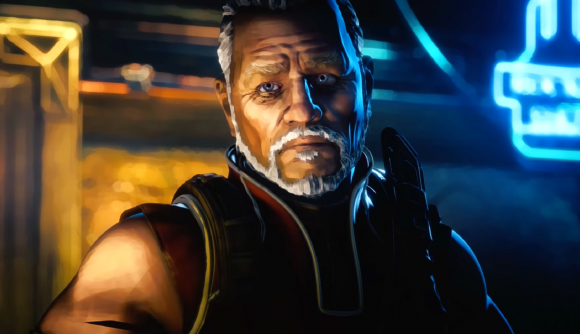 A leaked image has revealed the next seven characters joining the Apex Legends roster. Although nothing has been officially confirmed, the leak suggests the next Legend will be Valk, who we understand will have some kind of magnetism or gravity-based abilities. However, after Valk we’ll see Titanfall 2 antagonist Kuben Blisk and his minion Ash, who have been becoming increasingly important in the Apex Legends lore over the past few months.

If you’re following Season 6’s Season Quest, you’ll know that Pathfinder believes simulacrum Ash to be his girlfriend – although we expect their relationship to end as badly and explosively as Game of Thrones. Kuben Blisk has put his rugged South African accent to use as the commissioner of the Apex Games, as was confirmed when he invited Rampart, the most recent legend, to join the fray. Don’t forget the Apex Games are named after his band of mercenaries, the Apex Predators and every time you reach the highest level of Apex Legends ranked, you’re classed as an honourary member.

We expect both of these characters’ arrivals to cause some friction in future seasons, especially between ex-IMC trooper Bangalore and anti-IMC war doctor Lifeline. Plus, something big is going to have to go down to bring the commissioner into the fray.

The leak is blurry, granted, but multiple sources have confirmed that they have heard the same information. Popular Apex Legends dataminer ‘Biast12’ tweeted to confirm the leaks are true, and although the tweet has since been deleted, his bio currently confirms the Legends will arrive over the next seven seasons.

“As we usher the kings from their castles, we brandish them with wisdom. Let the People see the light, and rejoice with the coming of day.” – Prome1theus from ApexUncovered

For those struggling to read the incredibly blurry image, Season 7 will introduce Valk, then Blisk will arrive in Season 8 and Ash in Season 9. In subsequent seasons we will see Horizon, Fuse, Firebug, and Husaria. The poster also posted a better-quality image so we can see more clearly.

This image shows that all the characters will be Offensive characters other than Blisk and Firebug, who are Recon class. This second image also includes half of Loba wearing a skin that isn’t yet available. It’s believed to be a reward from the leaked Aftermarket event.

It’s worth remembering that these leaks are just that – leaks. Although Respawn has confirmed they are working on Season 12 at the moment, these characters are not confirmed and plans can change at any time – remember Forge?