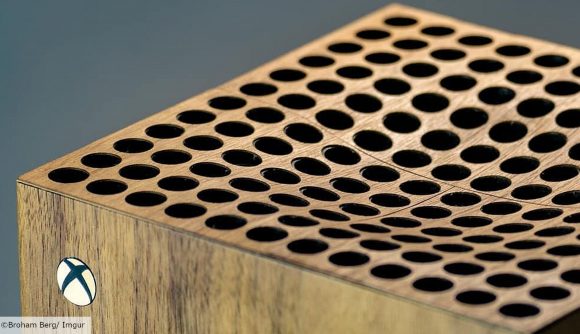 A sleek and simple black finish mean that most gamers bringing home their new Xbox Series X|S consoles will be able to slide them seamlessly into whatever interior decor they have. But one Series X owner wanted something a little more interesting than that, and decided to cover their shiny new console in 100% real walnut wood.

Yup, this treehouse-ready Series X is skinned entirely in actual wood. The creator, Reddit user u/LordBandimer, reveals that he used a laser cutter and “a lot of measuring and testing” to make the panels, which are less than a 1mm thick. While the sides are relatively straightforward, LordBandimer has also gone to the trouble of making the concave top (or side, depending on which way you’ve got your Series X) and ventilation holes using four separate small panels of walnut.

The craftsman also assures those intrigued by his design that overheating is not an issue, despite being wrapped in a layer of wood, because the original shell “is not a heat sink” in the first place.

While the top of the Series X is certainly tricky to sculpt out of wood, the rest is a pretty simple shape to replicate. However, he is now apparently taking on the challenge of creating a wooden skin for the Series X’s rival, the PS5, which has a far more intricate and elaborate design.

As it turns out, LordBandimer is a bit of a pro at this, as he works for a company that creates wooden skins for consoles both old and new. So maybe that PS5 won’t be much of a challenge after all?