I love a puzzle game, me. If you ask me to spend an afternoon with Pillow Castle’s Superliminal or William Chyr’s Manifold Garden I’d be happier than a pig in mud, except the pig is exceptionally confused and the mud is shaped like a bunch of weird, magical glyphs. So when I was offered the opportunity to review Total Mayhem Games’ fourth instalment to its We Were Here series: We Were Here Forever, I dusted off my brain massager and booted it up. But I was not alone.

You see, the We Were Here games are entirely cooperative experiences, which require you to work in-tandem with a partner to make your way through each title. So I brought along my mate Jack, who also loves a good puzzler. With the conditions for chaos and discord naturally met, we loaded in and immediately got to work building on our questionable synergy, and coordinating our way through We Were Here Forever’s opening sections.

If you’re new to the series – or to puzzle games in general for that matter – then you have nothing to fear, as We Were Here Forever provides a smooth difficulty curve that won’t throw anything mind-melting at you for the first hour or two. It’s a bit like It Takes Two, except instead of shouting at your partner across the sofa after they’ve failed the jump onto the Roomba for the fourth time, you’ll use the in-game walkie talkies to communicate with one another. It’s a nifty addition and saves you from booting up third-party voice programs, like Discord.

As Jack and I first awoke in Castle Rock, we found ourselves on separate paths – a recurring occurrence throughout the game. No sooner had we found our bearings, we were greeted by some simple symbol-matching teasers that would serve to ease us in and give us a flavour of what the game is all about. The entrées provided were certainly to our taste as we carefully turned the knobs, spun the dials, and skipped gleefully through the starting segments. And then buttons got involved…

Once we managed to reunite, we happened upon a slot machine built into a wall. One side had the machine itself, with five symbols crested beneath its wheels, while the other had a panel with six buttons – each matching the same symbols on the front – with four spring locks on a glass door that housed loot we’d need later. Needless to say, it’s a complicated bit of kit. 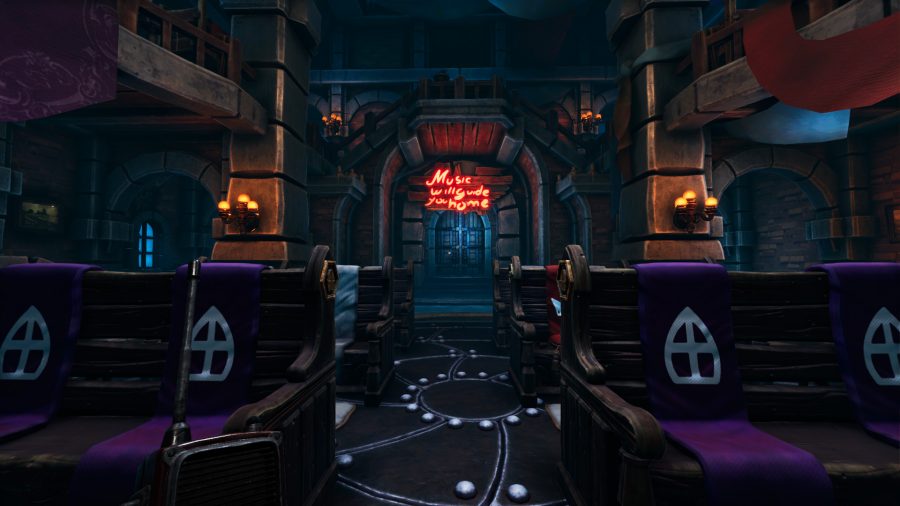 As I called out the symbols from one side, Jack set to work punching them in on the other. Nada. We tried a few different methods of entering them, yet each time we failed to hear the gently affirmative sound of success the game plays when a puzzle is solved. After banging our heads against the wall, we made the executive decision to switch sides, which proved beneficial as I serendipitously came across the major clue which would lead to the solution soon after.

Symbol-based conundrums certainly constitute a chunk of We Were Here Forever’s trials, and it’s the first time in a long time that possessing a brain full of eclectic pop culture references (and little else) has come in handy. A symbol in one puzzle resembles Mike Wazowski from Monsters Inc., another looks a bit like one of the Among Us characters with Shrek ears – sussy. There’s even a symbol reminiscent of the Trademark trap used by Valorant’s Chamber (one for all you competitive FPS gamers out there).

The puzzles have definitely teased, and on occasion even tormented our collective smattering of brain cells

However, despite a wealth of shared cultural idioms between Jack and I, codification – and in our case repeated re-codification halfway through working out a solution – of each symbol became a sticking point. Having to reluctantly concede on referring to something which clearly looked like the Fnatic logo in favour of ‘mathematical X’ for the sake of progress was almost as difficult as the puzzle itself. And believe me, the puzzles encountered on our escape from Castle Rock have definitely teased, and on occasion even tormented our collective smattering of brain cells. In other words, buttons are evil.

Though We Were Here Forever hasn’t reinvented the wheel when it comes to mind-bending conundrums, its playbook is a neatly-presented tome for the most part. From cursed slot machines, to portal puzzles, to messing with pipes like its Super Mario Maker, there’s a decent amount of variety. On a number of tasks, however, the balance of each player actively taking part in physically fiddling with some swanky contraption to make it swing open with a satisfying *kachunk* would skew too far in one direction, leaving one of us feeling disengaged until the other did what they needed to do. 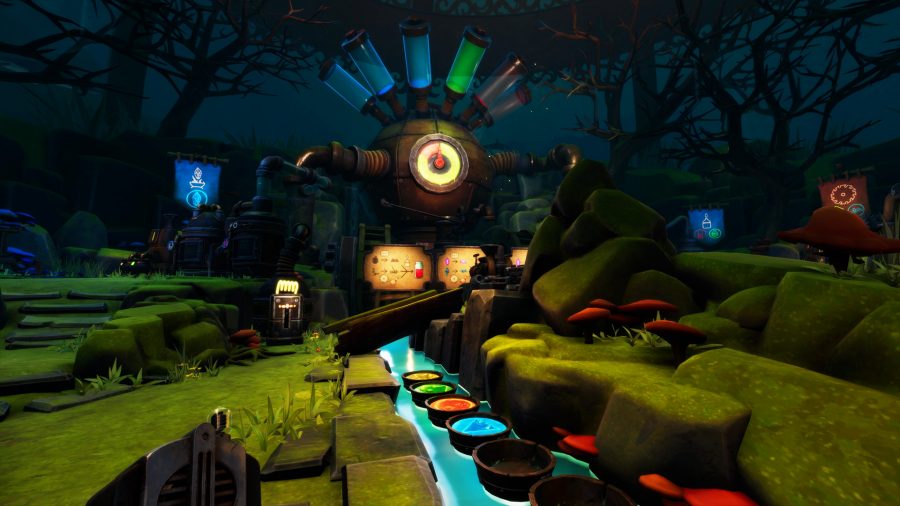 When it comes to overall presentation, We Were Here Forever maintains the same stylised visuals as its predecessors. Tasks are well-embedded into the game’s environments, even if some of its locales can be pretty pedestrian to potter about – we also often encountered hefty lag spikes when loading into new zones, making transition points janky.

Though we weren’t particularly engrossed in the opening cavernous areas and the keep, the lure of chatting to the local wildlife beneath the ocean and crafting all sorts of strange goodies in a mossy swamp lab towards the back end of the game certainly made up for it.

Further afield from land and sea you’ll even find possibly my favourite puzzle, featuring magical doors (Monsters Inc. strikes again) which appears to exist within its own little pocket of space-time. We Were Here Forever really steps the experience up when it leans into those more fantastical and otherworldly elements, though it risks leaving some of its more medieval machinations feeling a little… bland.

On that note, it’s time to touch on We Were Here Forever’s story. From memory there’s something about a king and a creepy sealed jester, but the whole thing was largely disinteresting, and served as little more than background noise. Though, to be fair, when you have two late-20-somethings with ever-contracting brain spans utilising their maximum cranial output to solve 10-12 hours-worth of puzzles in one sitting, there isn’t much space left for narrative, no matter how gripping it may be. 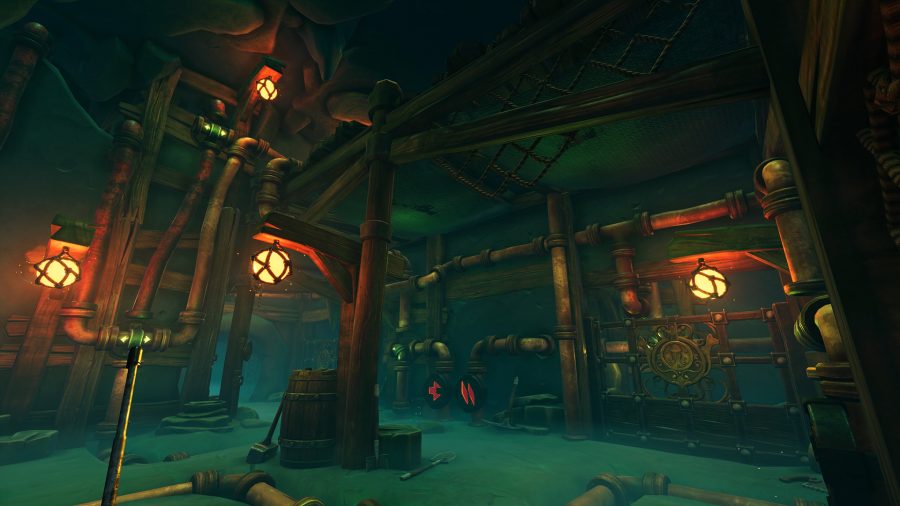 Unfortunately, Jack and I did at one point have to briefly put a stopper in our exploration of Castle Rock, as we ran into a rather skittish game-breaking bug which gnawed away at the progression trigger that would take us into Chapter Two. The good news is that the developers have been on hand throughout the process, and quickly squished the blighter. Though there were a few smaller bugs in our review build, these are all known quantities, and I was assured they would be patched out in the retail version.

We Were Here Forever is a strong addition to the series, and offers up plenty of fun challenges for you and your partner in crime. However, there are some pacing issues within a number of its puzzles, which leaves either you or your pal hanging around for way too long. Though this is Total Mayhem Games’ most ambitious instalment yet – with moments of magic scattered throughout – it still doesn’t quite do enough to really push the genre, though I look forward to seeing where the developer takes the series next.

We Were Here Forever (PC)

We Were Here Forever certainly lives up to the mantle of Total Mayhem Games' most ambitious project yet, and is great fun with a friend. However, its puzzles aren't particularly innovative for the most part - despite their strong presentation - and the skewed balance of some puzzles often leave one member of your tag team twiddling their thumbs while waiting for the other to finish their part.