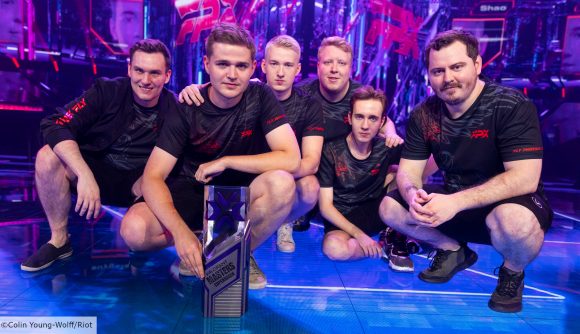 Valorant esports’ fifth international LAN event, the 2022 VCT Stage 2 Masters in Copenhagen, has crowned Valorant esports’ fifth international LAN champion too. The latest team able to call itself the best in the world is FunPlus Phoenix, which has battled through all kinds of adversity throughout both this tournament and the entirety of 2022 to come out the other side with a trophy.

Despite taking the longest and most arduous route possible over the last ten days – nine series, consisting of over 480 rounds of Valorant – FPX has come out on top after toppling fellow surprise finalists Paper Rex. Surely, only a team in the form of its life would be possible to run such a gauntlet and emerge victorious? FPX’s veteran IGL, Kyrylo ‘ANGE1’ Karasov, and coach Erik ‘d00mbr0s’ Sandgren hold a different point of view.

“I don’t think you saw the best FPX,” ANGE1 says confidently in a post-final press conference. “That’s for sure.”

“Yeah, I wouldn’t say this tournament has been fully [representative of] our identity,” adds d00mbr0s, claiming that “things are going to change” for VCT Champions in Istanbul later this year.

The fact that FPX clearly believes it has another level to its game is remarkable, and will be a daunting prospect for teams attending Champions. If the team can perform in the disciplined yet adaptable way it did in Copenhagen with a multitude of obstacles in its way, the ceiling for this team when those obstacles are removed is high.

Unpredictability, both in strategy and composition, has been a key talking point, and is one of the key factors in APAC’s Paper Rex dominating against every EMEA or NA team it has played this year up until its defeat to FPX in the Copenhagen final.

While FPX has maybe been more reactive due to its packed schedule in Copenhagen, it’s going to look to play into this unpredictability more. With a fair bit of time now in the run up to Champions, developing more comps and strategies to keep other teams on their toes is clearly a top priority.

“I feel like we can reinvent ourselves from week to week,” says d00mbr0s. “We have more than one week [until Champions], so it shouldn’t be that hard.”

This new innovation will come on top of a playbook that is apparently large already, according to Ardis ‘ardiis’ Svarenieks.

So, with the ability to counter unpredictable teams, and the desire to become harder to read going forwards, FPX looks to be in a commanding position ahead of Champions in September. Its long-awaited win on LAN appears to just be the beginning.