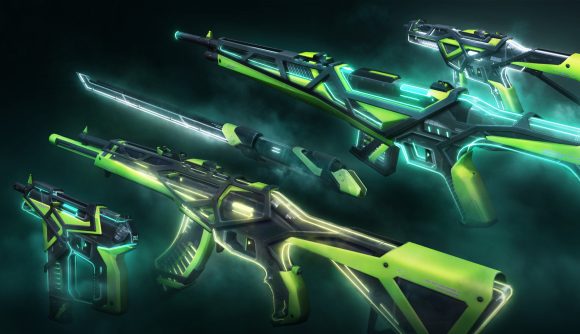 We’ve all seen the pictures and TikToks of people’s dream gaming setups – their high-end rigs sat atop the best gaming desks, drenched in RGB lighting from top to bottom. Well, Riot Games has announced that Valorant’s next skin bundle, the RGX 11z Pro, will complete the look.

“Inspired by high end gaming hardware with emissive LED lights, spinning tactile mechanical components, and premium reinforced plastic,” the new Valorant skins have been designed for the Frenzy, Guardian, Stinger, Vandal, and Melee. Oh, and if you’re all about those cyberpunk, Ghostrunner vibes, then you’re in luck, as the Melee skin can be extended out into a full-length katana – the first katana to be featured in the popular competitive FPS game.

Of course, you couldn’t have an RGB skin without the ability to cycle between different colour options. By inspecting each weapon in-game, you can alter the colour of its lighting. The colour of the muzzle flash as you fire each weapon, the trace of each round, and the resulting bullet hole will all match the colour of its current lighting option. Shiny.

The Afterglow skins will make up the upcoming RGX 11z Pro bundle, which will come with the usual assortment of goodies, though this time the gun buddy has a unique quirk where it will react when you fire your weapon.

How much RGB is too much RGB? Well, by the looks of these new Valorant skins, there’s no such thing as ‘too much’. If they take your fancy, but you don’t quite have the funds to splash now, then it may be worth waiting for the next Valorant Night Market to roll around, in the hopes that a cut-priced katana appears in your shop.