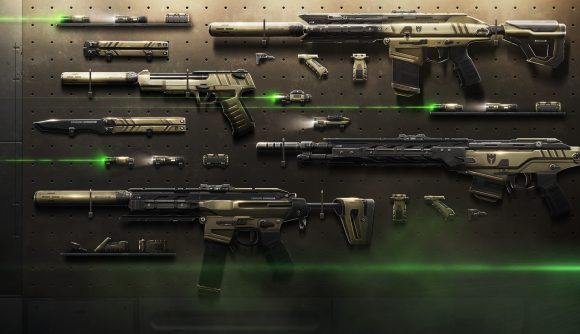 The latest Valorant skins have been announced by Riot Games, and this set might just be the one that cracks ex-Counter-Strike: Global Offensive players’ wallets. The Recon skin line is military-inspired, featuring all the bells and whistles in terms of attachments – which are purely cosmetic and won’t impact gameplay – to properly customise your loadout. Oh, and there’s a butterfly knife, too. The bundle, which is set to sit in the Premium Edition price tier, will set players back 7,100 VP.

The Recon skin line is set to provide new looks for the Phantom, Ghost, Spectre, Guardian, and of course the Melee weapon in the form of a balisong (butterfly knife). Art Lead Sean Marino says that Recon is “our attempt to capture that fantasy of being in a more traditional modern shooter” – something the skin team has been keen on adding to Valorant since early on in its development.

The Recon skins can be levelled up, with the butterfly knife providing custom animations and audio at Level 2. Marino says that the team “spent a lot of time looking at videos of butterfly knife tricks, seeing how other games have implemented them, and really just dug deep into delivering on an awesome experience.” As such, it seems that players can expect to see lots of sick knife tricks when using this Melee.

The base level gun skins, meanwhile, provide a custom ADS reticle, perhaps akin to a classic red dot or holo sight. Level 2 skins provide a randomised side attachment, while Level 3 adds an attachment – such as a stock or grip – to the bottom of the gun. Levelling up the gun skins all the way provides a Kill Banner. Old school Call of Duty players will be pleased to know that red, blue, and green camo variants are all available for the Recon line.

Following the Sentinels of Light event, which saw the introduction of both the titular and Ruination skin lines, Riot reintroduced the Sakura collection to the shop after it was announced that Episode 3, Act 2 would be delayed. Now, it seems that the next set of skins to replace Sakura in the coming days won’t be an old set, but the shiny new Recon line.