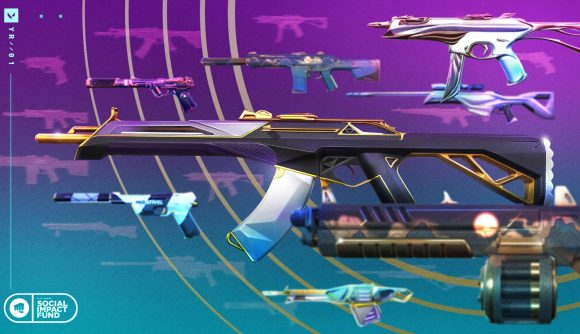 When Riot introduced the Run it Back Bundle back in January, fans were enamored by the opportunity to pick up some of the most popular Valorant weapon skins. With the conclusion of Episode 2, the bundle is back to see out the end of Valorant’s first year with a twist.

At the beginning of this month, Riot encouraged players to vote on which skins they’d like to see in the new ‘Give Back’ bundle, with 50% of the proceeds from skins and 100% from accessories going towards the studio’s Social Impact Fund. Everything from the Magepunk Ghost to the Sovereign Stinger was on the cards, and thousands of votes poured in.

With the results now totted up, and the full contents of the bundle, its pricing, and full bundle discount announced, we’ve got the full rundown on everything you need to know about the Valorant Give Back Bundle.

Valorant Give Back Bundle release date

The Valorant Give Back Bundle will release on June 22, and will be available for a limited time until July 8.

Valorant Give Back Bundle skins

The fan-voted Valorant skins that will appear in the Give Back Bundle are as follows:

Here are the winners of the Karma Give Back Bundle!

Purchase the bundle from June 22–July 8, and 50% of the proceeds from Weapon skins and 100% from accessories in the Give Back Bundle, will go towards the Riot Games Social Impact Fund, in partnership with Impact Assets. pic.twitter.com/pXyiXsaMXO

Alongside the skins, Riot has also announced exclusive accessories that can be bought with the bundle:

Valorant Give Back Bundle price

The bundle is priced at Premium Edition tier, meaning each individual skin will set you back 1,775 VP. If you purchase the full bundle, Riot has offered a modest ~10% discount, resulting in a total bundle price of 6,382 VP.

This awesome best-of bundle won’t be about for long, so if you like to look flashy when you’re planting that spike, you should probably check it out.