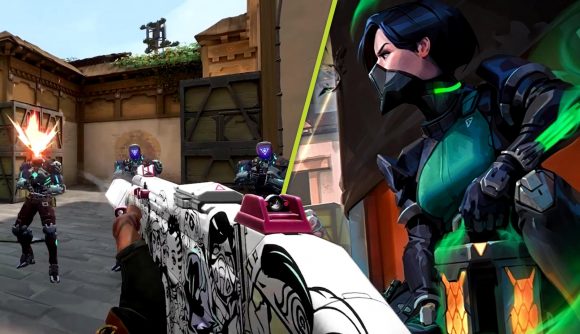 Whether you can pull off slick five-versus-one clutch plays or not, Riot Games’ competitive shooter is all about teamwork and the latest Valorant Doodle Buds weapon skins set brings two-dimensional teammates to the fight with a reactive cosmetic that actually colours in the cartoon while you kill. If this sounds like your cup of tea, you can pick them up from your shop in-game from April 13 – although, there’s no telling how long they’re going to be available for.

Yes, you read that right – Valorant’s Doodle Buds skins will actually start colouring in when you deal damage to opponents. All it takes is one shot to get a splash of colour and five to fully colour one of three designs on offer.

Through Twitter, Riot Games has offered fans a first look at what to expect from the Doodle Buds weapon skins set in-game – but, we don’t know how much they’re going to be just yet. However, looking at the skins, we’re willing to pay whatever it costs.

As mentioned earlier, the Valorant Doodle Buds weapon skins set is going to contain three different designs, at least – Riot Games might be hiding something from us ahead of their release.

The first design shared with fans features a chibi-style cartoon of Valorant’s roster of agents brushing shoulders. The next one paints your weapon with a selection of cute cartoon animals, including frogs and pigs. The third one, which is the coolest of the lot in our humble opinion, features characters from Riot Games’ MOBA League of Legends.

At the moment, we don’t have confirmation on how much these Valorant skins will set you back – but Valorleaks has suggested that it’s going to be a Premium Tier skin set. This means each individual skin will set you back 1,775 VP with an estimated bundle price of around 7,100 VP.

The Valorant Doodle Buds weapon skins set will contain five weapon skins, three playercards, and three sprays. If these aren’t to your liking, here’s everything you need to know about the Valorant Night Market – and when it’s actually active – and the latest Valorant patch notes here.