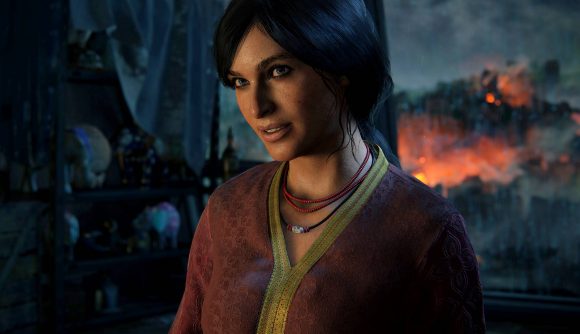 Naughty Dog’s Uncharted: Legacy of Thieves Collection is stealing a Platinum Trophy away from fans as two trophy lists are being merged into one for the PlayStation 5 remaster of Uncharted 4: A Thief’s End and Uncharted: The Lost Legacy.

When both games were originally released for the PlayStation 4, they offered full trophy lists for players to complete and a Platinum Trophy for dedicated trophy hunters to add to their collections. Now, though, the Uncharted: Legacy of Thieves Collection trophies will be a combined list from both games and the PS trophies previously attributed to The Lost Legacy will be appearing as a DLC list alongside Uncharted 4’s trophies.

Uncharted 4’s trophy list is ditching the five multiplayer-based trophies – as the Legacy of Thieves Collection isn’t releasing with this mode attached – and it will now include The Lost Legacy’s original Platinum Trophy, ‘Don’t Ruin The Moment’, as a Gold Trophy.

The wording of the trophy’s description has been changed slightly to reflect the fact that The Lost Legacy’s trophies will now appear in a DLC list for the Legacy of Thieves Collection alongside Uncharted 4’s trophy list – but the fact remains that players will have to do the same amount of work for half the reward.

Completing two full games for one Platinum Trophy is a tall order and – looking at both trophy lists in full – we can’t help but feel like we’re being robbed of that second Platinum Trophy when it comes to the work that’s going to need to go into earning it.

Thankfully, if you don’t want to start from scratch, you will be able to transfer your save game data from the PlayStation 4 version of either Uncharted game to the PlayStation 5 version through PS Plus’ cloud save feature – and the Uncharted: Legacy of Thieves Collection will only cost you $10 if you own the original releases.

Any trophies unlocked via the transferred save game data will be reflected in the new trophy list. This could be a quick way to get your hands on the Uncharted: Legacy of Thieves Collection Platinum Trophy.