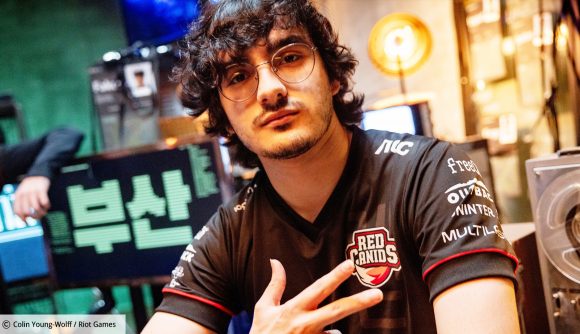 MSI 2022’s Group B has definitely been the tournament’s most dramatic. With initial, widespread reports of dodgy ping, followed by a late decision to replay all of Royal Never Give Up’s first round games once it had been remedied, it has been a long old slog for the group’s constituents. Today finally saw the group’s finale, and unfortunately for CBLOL representative RED Canids it ended in both defeat at the hands of RNG, as well as elimination from League of Legends’ mid-season event.

Despite emotions running incredibly high at the end of the game, The Loadout was grateful to have the opportunity to sit down with toplaner Guilherme ‘Guigo’ Ruiz for an interview to discuss not only the game, but his tournament experience overall, as well as MSI 2022’s premier top lane pick – Gwen.

Although there were moments during the game where the two teams were close on gold, few could prophesies anything other than victory for RNG – a prophecy which would of course come true. For Guigo, when it comes to playing a team with a rapid early macro game like RNG, “the most crucial part is to not fall behind in the laning phase.”

“It was the hardest part for us,” Guigo says, “because we felt that if we could just get into the mid-game even one or two thousand gold behind we could teamfight against them and play sidelanes.”

Alas, it was not to be for RED, and its nexus fell for the final time just shy of the half-hour mark. While the team will now be making its way to the airport, rather than to the Rumble Stage of the competition, Guigo feels that he had a positive MSI 2022 experience overall.

“I enjoyed it a lot,” Guigo says. “It felt really good for me to test myself against players like Su ‘Hanabi’ Chia-Hsiang and Chen ‘Bin’ Ze-Bin. It makes me feel like I can play against guys on this level, but I need a little bit more practice or more games [against them] – feeling that I can play on this level made the championship a lot more pleasurable for me.

“[As a team], I think that we showed how well we could play on the days we stomped PSG Talon and İstanbul Wildcats, but I think on the other days we really weren’t playing freely. I think we play our best when the five of us are playing free – just giving ideas and doing what feels best – and I think in some games we didn’t really know what we to do in certain situations, and we got a little bit desperate.”

But that is where the self-criticism stops for Guigo, who immediately begins looking to the future. “I think this team has a lot of potential [from the games we won],” he states, “I believe if we come back for Worlds, we will show it.”

RED may be heading home, but the experience and opportunity to learn from some of the world’s best players has been invaluable. For Guigo, watching Hanabi adapt quickly to the demands of the tournament has been his greatest learning point throughout his time at MSI.

“Hanabi has adapted a lot throughout the tournament,” Guigo remarks. “He blind-picked Vladimir against RNG, so it’s a really good point to put in my mind that I should have secret picks, and play more champions that would fit into certain situations.”

Today, he showcased his own ability to adapt and be versatile in the draft when required, picking Darius into the low-range composition RNG brought to the table. “Their comp was really good to play [Darius] against,” Guigo says, “because it was Tahm Kench, Graves, Gragas, and Gwen […] with high tenacity, and once you’re a few items into the game, you can destroy everyone.”

Although the intention was to play the Darius into Bin’s Gwen, RNG flipped the script by handing the seamstress off to Xiaohu, and putting Bin on Gragas duty. If anything, MSI has shown that Gwen is not only a powerful pick, but a flexible one too. Having been piloted 13 times – the third-most-picked champion at the tournament so far – Gwen has been on a tear with a whopping 77% win rate.

When asked what else makes Gwen so strong, Guigo points to her “really solid laning phase” that has very few bad matchups. Even in sub-optimal circumstances, Gwen retains the ability to safely farm under her tower, and can reach her two item spike without much fanfare. Additionally, the strength of (W) Hallowed Mist makes her a menace in teamfights.

When you combine all of these factors with the fall of Jayce as the premium top lane blind-pick in the drafting phase, Gwen easily becomes the highest-priority option, and can easily fit into every composition – at least those that RED wanted to bring to the tournament.

So, with this monstrous pick completely taking over games, what can be done to mitigate her in lane? Well, so far we’ve seen Sergen ‘Broken Blade’ Çelik successfully get one over Jeong ‘Impact’ Eon-young’s Gwen on Vladimir, while Guigo of course intended to match her with Darius. Right now, Guigo reckons Jax and even Garen can also go toe-to-toe with her, but only when piloted properly.

Before Guigo heads back to his teammates, he shares a final, resolute message for the RED fans cheering him on. “I will not stop here,” he states, “I will come back stronger. I will play on the level of big teams, and I am 100% sure I can play well against these guys. So expect more of me in the future.”

The onus is now on Guigo and his fellow RED Canids to take today’s pain and turn it into the fuel that will propel them to Worlds. For Group B escapees RNG and PSG Talon, their MSI 2022 campaign will continue when the Rumble Stage kicks off on May 20.