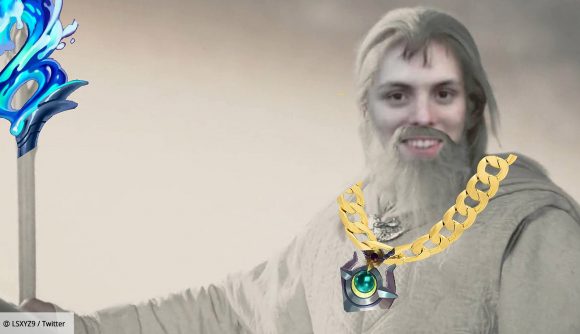 T1 League of Legends streamer and former LCK caster Nick ‘LS’ De Cesare will be joining the LEC’s analyst desk for the fourth week of the 2021 Spring Split.

“Look to my coming on Week 4 on the First Day, at 5.30pm CET,” his announcement tweet reads, “look to the east, towards Korea.” Attached to the tweet is a video clip, stylising LS as Gandalf from The Lord of the Rings. Instead of arriving at the Battle of Helm’s Deep, LS appears before the LEC contingent. And rather than the white wizard’s staff, the streamer can be seen grasping the Staff of Flowing Water, while a Moonstone Renewer hangs from his neck.

LS has been a major driving force in popularising the ‘Moonstaff’ item combo that we have seen pop up in pro play recently. Meanwhile, the competitive tier lists that he produced in conjunction with ex-Fnatic midlaner Tim ‘Nemesis’ Lipovšek have influenced the professional meta – particularly in the top lane. For example, in a recent interview with The Loadout, Excel Esports’ toplaner Felix ‘Kryze’ Hellström attributes picking Ivern and Lulu recently in the LEC to these lists.

Although some fans were initially confused by what the announcement actually meant, Trevor ‘Quickshot’ Henry later confirmed that LS would be joining himself and the rest of the LEC team for the week.

So excited to have @LSXYZ9 joining the analyst desk all weekend long! #LEC #LCK crossover you never thought possible, it's happening. https://t.co/qUTXLbCKll

With LS making his LEC debut, we just know that the Twitch chat will become a polarised mass of ‘LS RUINED LEC’ vs ‘LS SAVED LEC’. We can’t wait.