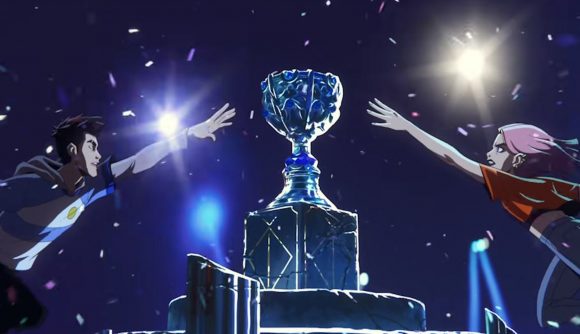 August 24, 2021 Riot Games has confirmed that it will host LoL Worlds 2021 in Europe instead of China.

Riot Games is changing hosts for the 2021 League of Legends World Championship and will shift from China to Europe, the developer has confirmed. The decision, which was first reported on by Upcomer, was taken to ensure that Riot was giving the “best opportunity to the most teams and their best players” to compete, according to global head of LoL esports John Needham.

This year’s LoL Worlds was scheduled to take place across multiple cities in China, which was Riot’s original plan for the 2020 tournament before scaling the tournament back to a single-city event in Shanghai due to the pandemic. However, Upcomer claims that Riot has encountered problems securing travel for many of its production crew, and is now planning to host the tournament in Europe instead. Teams in the North American LCS have also reportedly been struggling to secure visas.

In an announcement video, Needham says that “with the Delta variant, travel restrictions and COVID protocols have been even more complicated to navigate in 2021 than in 2020.”

Despite the global situation last year, Riot managed to pull off what was the first major international LAN event since the start of the pandemic when it hosted LoL Worlds 2020 in Shanghai. It even successfully hosted the final of the tournament between DWG KIA (then DAMWON Gaming) and Suning in front of a live audience of around 6,300.

While Needham confirms that Worlds will move to Europe, he cannot yet say which country or city will become the new host.

“Accessibility for the highest number of teams and their best players will be the key deciding factor” to picking a new host in Europe, Needham explains. This decision will likely come after all the qualified teams have been confirmed.

Needham also says that more information on Worlds 2021 will be made available in the “days and weeks ahead.”

The last time Worlds came to Europe was in 2019 and was a multi-city event that held stages in Madrid and Berlin before holding the final in Paris.