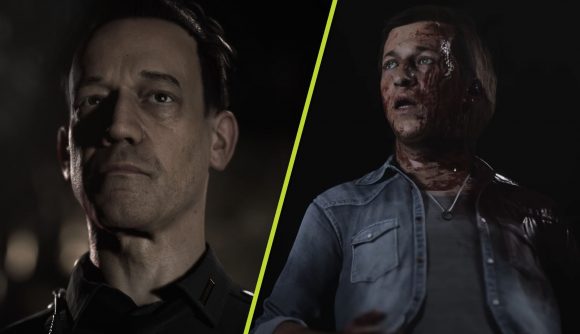 The Quarry is out in just a few weeks and we now know a little bit more about some of the more graphic scenes in Supermassive’s latest thanks to the game’s ESRB rating.

The rating, which includes a summary on the ESRB website, highlights that some choices in the game “lead to depictions of intense violence”, which isn’t too surprising. One character can apparently be seen “severing a man’s hand with a chainsaw” in the game, while another scene features a creature “mauling and decapitating a character”. In addition to that, a moment in the game features “a shotgun blast ripping apart a character’s face”, we can only imagine what that looks like until we play the game for ourselves next month.

A little further into the rating summary we get a taste of the game’s dialogue and this is where things get a little bit more interesting than your typical gory horror fare.

Described as “suggestive” and “sexual innuendos”, the game features multiple moments of sexually suggestive dialogue according to this rating. One character apparently says “I knew there was a secret sex dungeon around here somewhere”. Another person makes a sexual joke about painters: “shy couldn’t the fastest painter in the world ever keep a girlfriend Because he always finished in one stroke”

Finally further mentions of sex and curse words like “fuck”, “shit” and “asshole” also appear in the game.

In summary, it looks like The Quarry will be a rather gory and suggestive murderfest that won’t tone down its adult themes. We can’t wait to see some of the performances from The Quarry’s voice actors and cast as their characters are dying and mutilated in new and horrific ways.